Correction: As pointed out by Torrent Freak this article originally featured a map that showed the torrented games with the greatest variation from the average for each state instead of which games were most downloaded. We’ve removed that graphic and added accurate statistics directly from the raw data.

Skyrim and soccer — that’s what the people like … to not pay for.

BitTorrent, a peer-to-peer file sharing protocol, is one of the most popular ways for pirates to illegally share copyrighted material. That is true of movies, music, and, of course, games. Our friends over at the Movoto real-estate blog decided that they would take a look at torrent activity on a state-by-state basis, and it found the game that each state was pirating the most.

Here’s how it breaks down:

Movoto, which helped us find this data, has a map that actually features misleading data. It shows a list of games that are supposedly the most downloaded in each state, but that isn’t correct. Its map is actually showing the games with the most variation from the average. It’s confusing, but it just means that if the average download rate per state for something like The Sims 3 is 18, and Montana downloaded it only once, it’ll show as a huge variation. Clearly, that has nothing to do with which games states were pirating most frequently.

To correct this, we went through the raw data itself and picked out the games that each state is actually downloading the most.

It’s no surprise that Skyrim, a huge single-player role-playing game, dominates the list. It is interesting, however, to see games like Pro Evolution 2013 and Need For Speed top the charts in the less populous areas of the country.

Naturally, these states have varying populations, so Movoto also provided a chart that shows the rate of pirates per 10,000 people in each state. It turns out that Washington State, Kansas, and Ohio have some of the highest rates of digital swashbucklers.

Check out the chart: 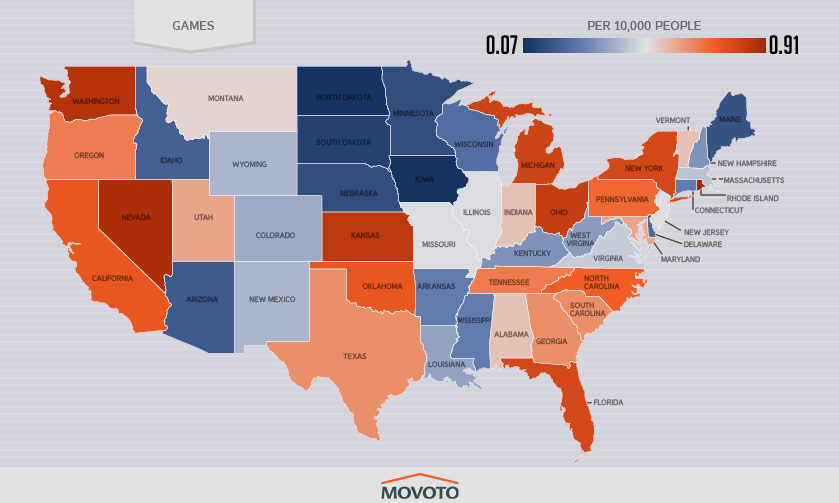 Above: State-by-state breakdown of piracy rates for games.

While Ohio and Nevada look very red, that doesn’t mean roving bands of pirates have overtaken those states. The worst state only has a game-piracy rate of less than 1 person per 10,000 people. For movies, that number is closer to 1.65 per 10,000, while TV shows have a whopping 4.3 per 10,000. You can thank Game of Thrones for that.