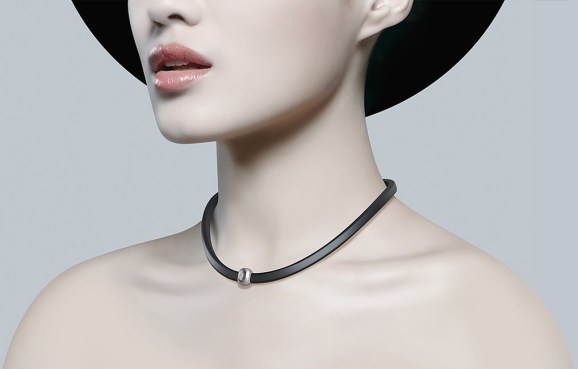 Have you ever counted how many fitness gadgets you have in your office that just sit in the corner, covered in dust? When was the last time you wore that $200 fitness bracelet when going for a run? Fineck, a new personal activity tracker, aims to monitor your neck and spine condition in the form of necklace. Compared to existing products, Fineck believes it is not crucial to know the number of steps or how many calories we have burned in a day. Instead, the focus is on the condition of the neck and spine.

Fineck’s patent-pending health analytics system called ‘Neck-Health’ is a data processing and analyzing platform that Fineck developed alongside the Sport and Health Research Center of National Chung Hsing University. Once users begin wearing the Fineck necklace, it will constantly track and monitor neck and spine activity and alert users when they have bad body posture or become inactive for too long. It also allows movement tracking and interactive gaming to make sure the users get enough neck exercise throughout the day.

Unlike most of the wearable tech currently on the market, Fineck does not require frequent recharging, typically just once a week. For further convenience, Fineck is also waterproof, which means users can wear it when swimming or in the shower.

Despite Fineck’s efforts to make it universal and practically weightless, it will undoubtedly face a question that all wearable tech products struggle to solve: form or function. Users are increasingly raising the bar for wearable tech to meet their needs for both utility and fashion. The somewhat geeky side of the Fineck appearance makes it a challenge for users to adopt it without considering whether or not it goes with their outfits, especially in the case of users for whom glamour often trumps functionality. “It is a delicate balance between form and function, which is why it becomes so important.” said Fineck chief marketing officer Liu Heqing. “We are working on developing smart wearable in different forms — more simplified and fashionable forms, for example, one that goes on your collar instead of around your neck. It will offer the same monitor function while keep it minimally visible”.

VEARI, the Chinese startup behind Fineck, was established in 2012 with offices and development centers in Chinese cities Beijing, Shenzhen, and Taipei. Besides Fineck, it has another product called Ideapen, an iPad stylus.