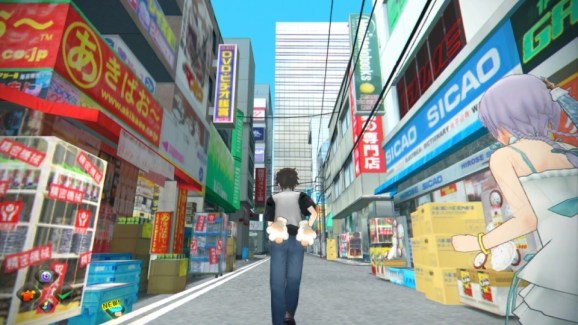 Over 130 real-life Akihabara businesses are represented in Akiba's Trip.

Re-creating one of the most revered city districts from the ground up requires a lot of ad space.

The developers at Acquire have made a virtual doppelganger of Japan’s Akihabara (or “Akiba”) district twice now. The studio’s nearly exact duplication of the famous geek-centric “Electric Town” is the sole location of the recently released PlayStation 3 and PS Vita action-role-playing game Akiba’s Trip: Undead and Undressed. I recently discussed the effort it took to rebuild one of the most famous neighborhoods on the planet with Tom Lipschultz, the localization specialist at the game’s Western publisher Xseed Games.

Remaking their own back yard

While Undead and Undressed is the first glimpse most Western gamers would have seen of Acquire’s virtual Akihabara, the game is the second tile in a growing franchise in Japan. Akiba’s Trip (or Akiba’s Trip 2 in Japan) represents a leap forward in Acquire’s attempt to bring the district to life. A lot of that skill comes from the developers effectively remaking their backyard. 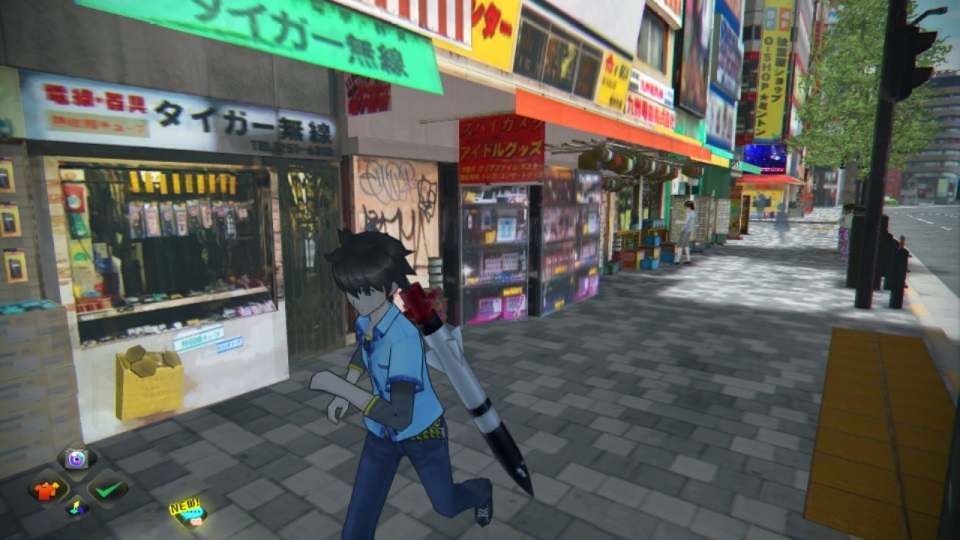 Above: Real-world map and photographic data helped remake the Akihabara district of Japan from the streets up.

“The developers … are actually based out of Akihabara themselves,” said Lipschultz. “… You can see the front window of their office in-game — as soon as you gain control of your character after the initial set of cutscenes, turn around and look at the third floor of the building across the street, and you’ll see their … logo staring back at you.”

Real life has leaked into Akiba Trip from multiple direction. The street layout of the overworld map and many of the actual game backgrounds are direct translations of the area around Akihabara. Acquire used photos taken around the district “as background textures in numerous places throughout the game” and relied on map and photographic data for block-to-block accuracy.

Most every storefront in Akiba’s Trip is a virtual representation of an actual company on the real-life Akihabara streets. Maids hand out flyers for actual themed cafes in the area, and the facades of retail chains like Sofmap are in the exact place where they would be in Japan.

“Over 130 local businesses were consulted and agreed to lend their likenesses and logos to the game, so there was absolutely lots of consultation with store owners,” Lipschultz said. “Even stores that weren’t down for being accurately represented got close parodies. One of my favorites of these is ‘Sister Donut’ (instead of ‘Mister Donut’).”

A true re-creation of Akihabara would not be complete without its rampant advertising. The ads that act as the game’s collectibles and loading screens are direct from Akiba businesses, displayed just as they were in Electric Town. 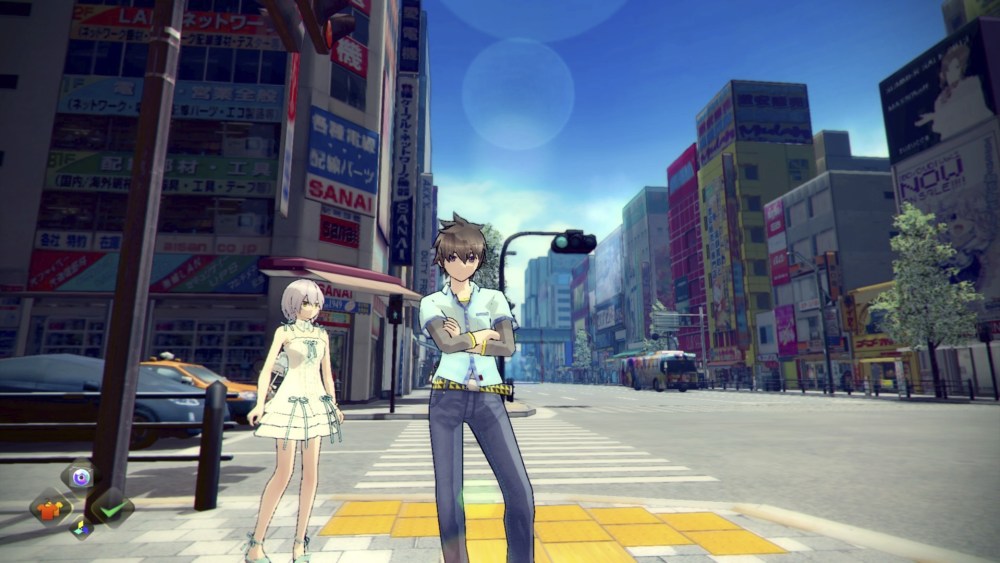 Above: Most every building in Akiba’s Trip is in the exact same position as its real-life counterpart in Japan.

“If you’re going to accurately represent the Akiba experience, you really can’t do that without rampant capitalism since that’s what the district is all about at its core,” said Lipschultz. “I think the setting itself makes the advertising elements not only palatable but pretty much mandatory. Without them, it just plain wouldn’t be Akihabara.”

The techniques used at Acquire to, well, acquire the licenses for these ads remains under wraps. But part of the agreement for the game’s English translation forbade any direct ad translations (“not even to translate the text in them,” according to Lipschultz.) “Textual transcriptions of their phone numbers, addresses, [and] website links” were also restricted. The publishers at Xseed undertook the challenge of transcribing such a niche game for a chance to let players make the gamer version of a pilgrimage.

“[Akiba’s Trip] speaks directly to the exact niche we typically represent,” Lipschultz said. “Offering players a chance to become a ‘virtual tourist’ in a ‘sacred place’ that a good chunk of them wish more than anything to visit someday.”

Acquire’s re-creation of Japan’s Akihabara district is the central star around which the Akiba’s Trip franchise orbits. But, as Lipschultz himself discovered, such a true-to-life virtual model could lead to some eerie encounters. 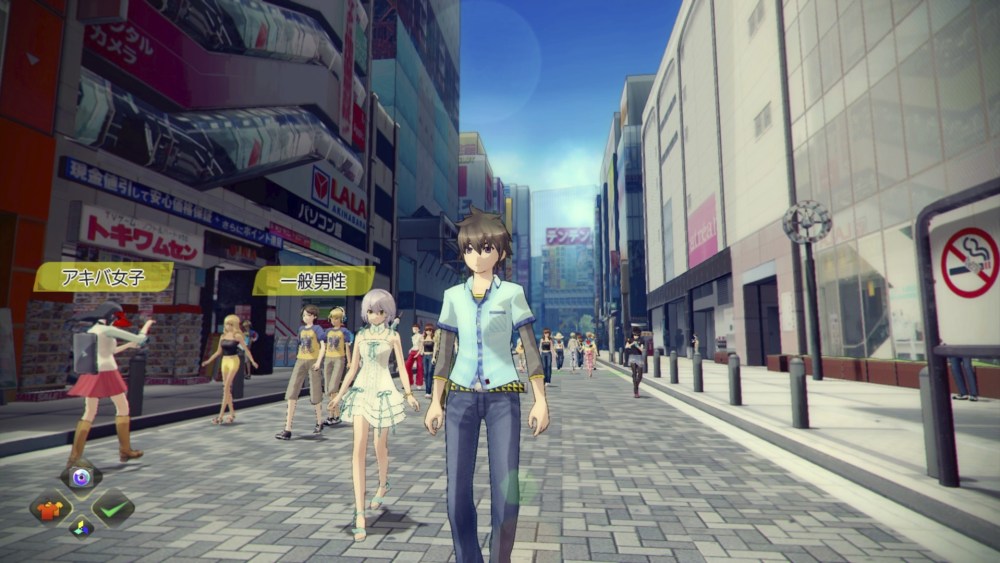 Above: In-game advertisements are actual Akihabara flyers and billboards.

“In the game, there’s a tiny portrait gallery tucked into a storefront in Electric Town Plaza, and if you pass by there, a pushy art dealer will stop you in your tracks and … coerce you into her shop and force you to buy a painting,” said Lipschultz. “Because of their tendency to ‘abduct’ Akiba residents, art dealers from this gallery are colloquially known as ‘eurian’ … a Japanese portmanteau of ‘euri’ (art-seller) and ‘alien,’ which we translated as ‘Artlien.’”

“When I was walking through Electric Town Plaza in real-life Akihabara this past March, I passed right by this exact gallery, and a woman holding a painting in both hands literally leaped into my path and tried desperately to coax me into her store. And all I could do was think to myself, ‘Holy crap … Artliens are real!'”