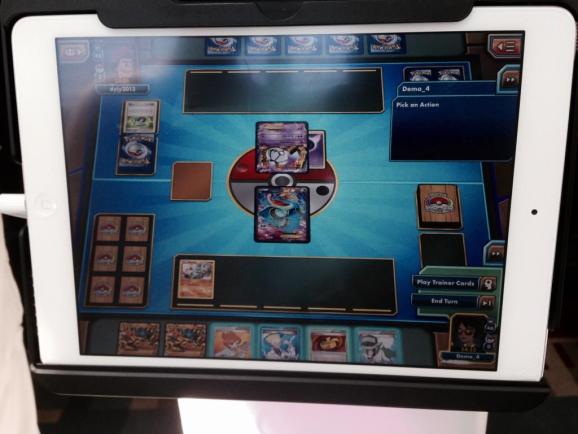 You know how Nintendo said it’s not going to make games for iOS? … Yeah, that’s all changed now.

The company is working on bringing Pokémon Trading Card Game Online to Apple’s tablet. It should hit the iPad before the end of 2014. This represents a major departure for Nintendo, which has previously focused all of its game production efforts on Nintendo hardware — although it has released iOS apps before (like the Pokédex). Likely, the earnings potential for something like the Pokémon card game on mobile was too strong for Nintendo to ignore.

“Yes, we can confirm that is the Pokémon TCG Online iPad app, and it’s coming later this year,” a spokesperson for The Pokémon Company, a wholly-owned subsidiary of Nintendo, told GamesBeat.

It looks like Pokémon TCGO is in works for the iPad! Should be a huge way to expand the game. #PlayPokemon pic.twitter.com/SPlx3QZaTC

Pokémon Trading Card Game first debuted in Japan in 1996 alongside the video game and the television show. Like the Game Boy releases, the physical cards were also a major part of the Pokémon phenomenon in the 1990s. Also like the video games, the card game’s popularity continues to today. Nintendo has previously released an online version of the Trading Card Game for Windows and Mac computers.

By bringing Pokémon’s card game to iPad, Nintendo is opening it up to a whole new audience while simultaneously giving its established fanbase an easy way to play the game digitally. Millions of people have iPads, and the device is one of the most popular game-playing machines in the world.

Nintendo could also introduce in-game purchases, like booster packs that cost a few dollars, that could start bringing in major revenue. Publisher Blizzard is finding a lot of success with its free-to-play puzzler Hearthstone: Heroes of Warcraft for iPad and PC, and nothing is stopping Nintendo from doing the same.

With a Wii U home console that many gamers are ignoring and a 3DS handheld that isn’t selling as well as its DS predecessor, Nintendo has struggled to generate cash. The company reported a $229 million loss during its last fiscal year, and it could easily fail to reach profitability again this year if some upcoming Wii U games fail to catch on.

Due to its financial situation, Nintendo investors have often urged the publisher to turn to the highly profitable smartphone market. Consumers spent $16 billion on mobile games last year, and Japan is the biggest market for that activity.

Nintendo president Satoru Iwata has often rebuffed investors asking the company to make apps. He previously acknowledged the market as potentially profitable, but he said it wasn’t necessarily the best place for all of Nintendo’s games.

“The spread of smartphones does not spell the end of game consoles,” Iwata said in January. “Its not that simple, and it doesn’t mean we should put Mario on smartphones.”

While a Super Mario Bros. game on iOS still seems like a crazy idea, it does seem a bit more plausible today.