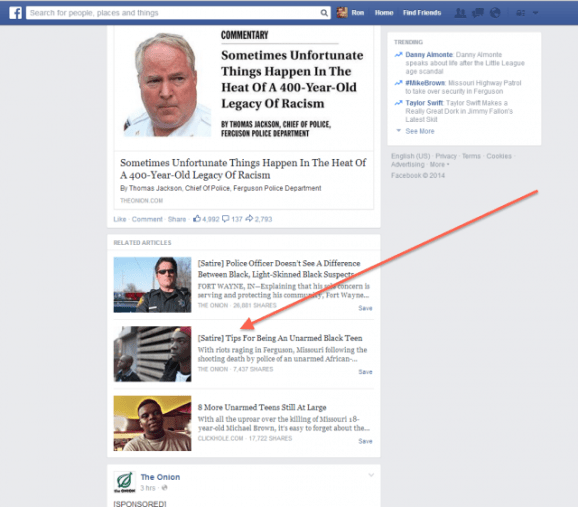 Facebook is piloting a Satire tag for fake news stories in the newsfeed, Ars Technica reports.

“We received feedback that people wanted a clearer way to distinguish satirical articles from others in these units,” a Facebook representative apparently told Ars Technica.

According to the report, the company has been piloting the tag for a month and is applying it to more outlets than just the Internet’s favorite satirical news site, The Onion. No word on if it will become official policy or what news sites will be affected.

We may all laugh and point fingers at the supposedly gullible users who can’t tell the difference between an Onion story and one from a credible outlet. But, parody sites have pranked some of the most venerable media outlets to date.

The Washington Post fell for a prank story about Sarah Palin joining the Al Jazeera network. In one of the most embarrassing corrections in the newspaper’s history, they wrote “CORRECTION: An earlier version of this post incorrectly reported that Sarah Palin planned to contribute to the Al Jazeera America news network.”

Successful prank website The Daily Current has built an entire business around fooling the public and occasionally the intellectual elite. But it’s not always professional pranksters.

Much of the Internet, including Stephen Colbert, got swept up with the Tacocopter hoax, a drone food delivery service made up by some savvy amateurs.

“The Tacocopter site, which has been up since last July but only in the past few days has garnered media attention, has been liked on Facebook more than 14,000 times, and retweeted close to 4,000 times,” reported Wired.

So, snobby Tweeters can throw snark all they want at this policy, but I think it’s humbling to admit that many — if not most — of us have been caught up by a fake story.

Now, we can argue whether it’s Facebook’s role to be Dr. Buzzkillington on a good joke; but, that’s an entirely different question.