Crawl is (appropriately) a dungeon crawler with an 8-bit heart of gold, a fun lark that takes on a whole new life when played with friends, and a game with one big, conditional flaw.

The art style and music are pure retro: Modeled after arcade dungeon crawlers, they manage to somehow give the hero and monsters their own personalities and a trippy, kinetic feel.

If Atari’s classic Gauntlet (the 1985 original, not the Warner Bros. remake due this September) was three-quarters view instead of top-down, it might have looked like this.

Crawl is for PC, Mac, and Linux; it was released by Powerhoof on Steam Early Access August 6. We played it on PC using the mouse, the keyboard, and a PlayStation 3 game controller to control the hero and ghosts. 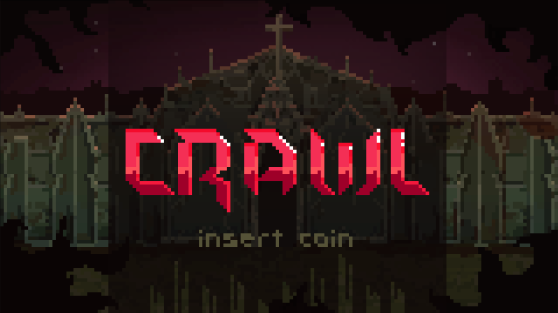 Above: Just fire up the game, and you’ll know you’re in arcade heaven.

Being bad is so very, very good

It’s good that both hero and monsters have personality, because you’re going to spend time as both. As the hero, your job is to hack and slash your way through monsters and objects to level up so that you can face the end boss. You can buy better weapons and earn better abilities from dropped gold.

If you die, you become a monster, and the person or bot previously playing the monster “regains his humanity” and takes your place. The monsters level up, too, via “vitae” points that players earn after clearing each floor, and they earn gold of their own from spilling the hero’s blood.

As the hero, you have a simple attack and a special attack, controlled either by mouse or keyboard — not both (or by game controller, if you choose). Battle your way through the levels to face off against the bosses, controlled by a bot or another player.

As a monster, you start as a ghost, which can possess traps or physical monsters and then attack the hero. And if the hero makes it to the boss of a level? Yes indeed: That’s you.

You’re going to find yourself secretly wishing to die if you’re playing as the hero, because the strategy of playing the ghosts (what you possess and how you use it against the hero) is so very much fun. As the hero, the big payoff is getting to beat up on your friends, if you’re playing with others. More on that in a second. 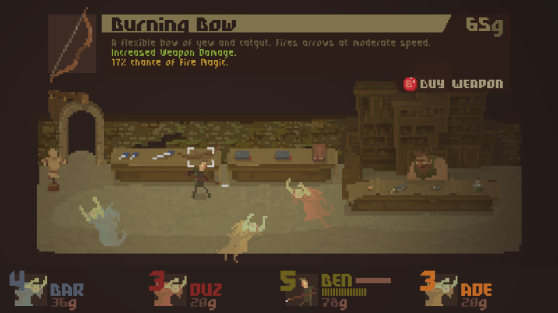 Above: The little shop of whack-a-horror(s).

Easy to pick up, smooth to play

Crawl’s action is fast and smooth, and while rooms are somewhat featureless, it’s impressive how much personality and how many effects you can simulate with large square, pixel-like blobs of color. Clearing a floor is quick, taking just a few minutes, and the run to level up enough for a boss easily takes less than half an hour. 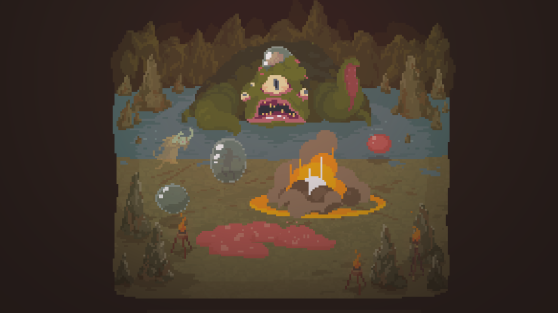 Above: A player self-portrait. This end boss reminds us of Futurama for some reason.

But where the game really shines is multiplayer. When human beings are controlling both hero and monsters, what was a quick-paced crawler becomes a frenetic battle, with heroes battling it out against player-controlled monsters that take their turn as the hunted hero if they’re successful at killing him.

Playing as the monsters constantly changes. Depending on how far you’ve evolved, you’ll add new abilities and forms to each of the three beasts you can inhabit. Which monsters you get is determined by how much power you’ve sucked up from blobs on the floor, which evolutions you’ve chosen to spend your vitae on, and by the god you choose to worship when you create your character. A rat-like creature can become a minotaur, for example.

Monster abilities vary widely. You can breathe fire with a dragon-like creature or shoot arrows from a skeleton. Inhabit traps with your ghost, and you can do things like send lines of spikes shooting up from the floor at the hero, snap a trap shut on him, pepper your opponent with fireballs, or send spiked stars wheeling across the floor.

As the hero, you can chose a variety of defensive abilities — set up shields! carry an eyeball to reduce damage! — and a range of weapons from daggers to pikes with which to slay beast and friend alike.

There are a wide variety of creative ways to kill your friends, and this is easily the best part of the game.

You can choose how many bots you battle against: The game starts with any mix of people and bots, from two to four players (one hero and up to three ghosts/monsters). The bots are surprisingly smart, but playing with friends adds another level of fun. 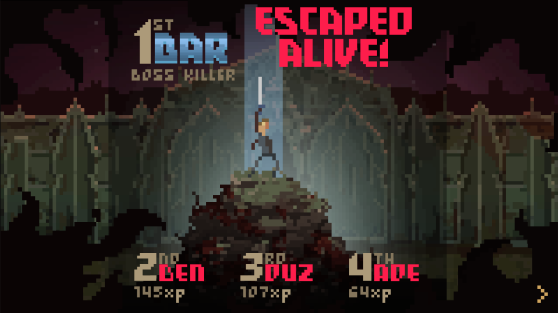 Above: Now there’s a victory screen you can rub their noses in!

No online multiplayer in a game that thrives on competition

This is Crawl’s Achilles’ heel: Its multiplayer is couch co-op only, on a single machine. It is so fun playing with other people — one person can use the keyboard, another the mouse, and the rest game controllers — that many of the threads about this game in its Steam forum were at one time or another dominated by the discussion of why it doesn’t have online play. Those discussions continue despite a permanently pinned post addressing it.

Dave Lloyd, the game’s programmer at Melbourne, Australia-based Powerhoof, says they hope to add online multiplayer while the game is still in Early Access. It’s clear their players hope they can overcome the technical difficulties that would pose.

Room designs are (at this stage) plain

Most of the environments at this point are a little simple — straightforward rooms with some bits of repetitive, destructible furniture; traps and pentagrams for the ghost opponents to inhabit; and doors leading to the next room.

The developers have said they expect to add more monsters, more weapons, more abilities, and more environments as the game moves through Early Access, but for now, the focus is definitely on the gameplay, not where it takes place. 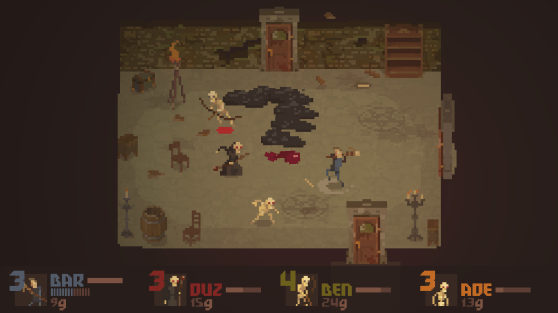 Above: A typical room: a few pieces of furniture, your enemies and a lot of blood. (The one in blue is the hero.)

Crawl is a lovingly retro arcade crawler that will instantly appeal to gamers who remember pumping quarters into games that were just like this (but not as intelligent).

The variety of weapons, monster evolutions, and abilities mean good replay value even though floors and the time to end bosses are quick.

The lack of online multiplayer for a game that is at its most fun when you know who’s pummeling you is unfortunate, and it’s not surprising Powerhoof is trying to build it in. But in the meantime, Crawl gives you a truly fun reason to seek out some people to huddle around your PC.

Crawl is available for Early Access play now on Steam for $10 on PC, Mac, and Linux (and DRM free on Humble). Powerhoof provided GamesBeat with a free Steam download code for this review.