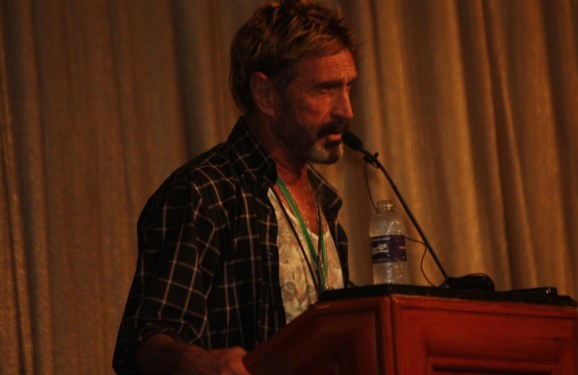 If you think that Google’s collection of personal data is innocuous, McAfee wants you to think again.

“Google … would like us to believe that if we have nothing to hide, we should not mind if everybody knows everything that we do,” McAfee said during an appearance at the Defcon security conference in Las Vegas August 8, captured on video by the BBC, below.

“If everybody knew everything about everybody else, what would human behavior become?” McAfee asks. “You need to think this through.”

Watch the video below to see McAfee’s call to arms for privacy.

“We cannot have intrusions into our lives and still have freedom,” he said.

“And freedom is all I have. And it’s all you have, if you think about it.”

We’ve also included an earlier interview with McAfee, from January, 2014, in this playlist, in which he talks about the dangers behind botnets running on the Internet of things. He also explains that the antivirus company he founded, which is now part of Intel, no longer bears his name.