I’ve talked before about the charmed life of Tommy Palm, a key figure at King Digital Entertainment in the creation of the hit mobile game Candy Crush Saga. But in looking at Palm, it’s clear that the line between winners and losers is a thin one.

Palm was part of a team of four people who took a so-so game on the Web and converted it into one of the biggest mobile sensations ever. Last year, King generated more than $1.8 billion in revenues, most of it from one game: Candy Crush Saga.

That was enough to enable the company to go public at a valuation of $6 billion, making Palm a rich man. His story is like many entrepreneurs. He was once so broke that he considered giving up on the game business. He endured six months without a paycheck, and he almost took a job at McDonald’s to pay the bills.

King missed its targets for its most recent earnings, and the company’s stock price tanked. But for someone with humble beginnings like Palm, King’s current troubles aren’t all that bad. He has hit low points in his life before, as we learned during the Casual Connect conference in San Francisco. At that industry event, fellow game developer Arseny Lebedev (the founder of casual game house Signus Labs) interviewed Palm about his life. Here’s an edited transcript of their talk.

Arseny Lebedev: You’re an inspiration to me. You’ve been in the business forever. You have a nickname — Tommy “Danger” Palm. Tell us more about yourself. Where are you from? What’s your background? Why are you in games?

Tommy Palm: I’m from Stockholm, Sweden. I’ve been passionate about game development ever since the age of 12, when I had a Commodore 64 and learned programming with some friends. We made games together. I continued doing that on a hobbyist level until the end of the 1990s, when I started my first game development company, Jadestone. In 2009, I founded Fabrication Games, which King acquired in 2012, together with Alex, our technical director.

Lebedev: What did you work on at Jadestone?

Palm: Our first game was a war strategy game called Kodo, but the first big game that we made was a football manager game with online multiplayer. Mostly for web, but we had some mobile extensions to it. At the time, it was impossible to get those kinds of things working, though, especially with a business model around it. 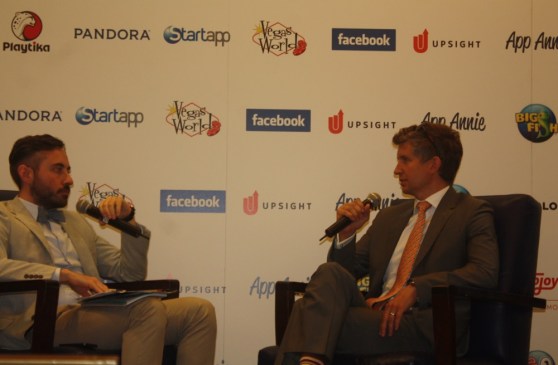 Above: Arseny Lebedev of Signus Labs and Tommy Palm of King

Lebedev: What about Fabrication Games? That was a mobile company, right?

Palm: Jadestone eventually went more over to gambling, so Fabrication was where we took the mobile content we’d developed and continued with that. We focused solely on making cross-platform games. That’s what we figured would be big in the future.

Lebedev: What were some of the high points and low points in that long stretch?

Palm: They were often tightly connected. I started Jadestone straight out of school. There was no money backing it whatsoever. It was just me and some guys early on who were able to live on very little money.

We were blown away originally when we saw mobile games on the Nokia 6110. The multiplayer Snakes version was fantastic. We figured this was going to be huge. We just didn’t know it would take 10 or 15 years for it to get there. It was a lot of struggling with great ideas and the limits of technology — plus, nobody really had a clue about business at the time. But we figured out we needed that when we ran out of money.

I remember this vivid moment in early 2000 when I’d been living without any income for the past six months. I’d started to evaluate whether I was going to take a job at McDonald’s to support myself, or if I was going to continue doing this. We were at a conference in Gotland, and it had been raining. Everything was very gloomy. But we’d sent a proposal to Nokia, and we sat down at a bar and got the deal. The contract was huge by our standards at the time, and at that moment, the sun came out. I was almost in tears. That would save the company for another two years, and we started working very closely with Nokia. That’s one of my absolute highlights.

Another of those moments was later, with King, in November 2012, when the mobile version of Candy Crush was released and we saw the numbers for the first weekend. That was one of those moments you never forget. We had a bet going in the team as far as what kind of numbers we were expecting, and I was ten times under that number.

Above: Candy Crush Saga is one of the big smartphone games, and it’s driving the growth of mobile gamers.

Lebedev: We’ll talk about that soon. But what about a low point? As an indie guy, sometimes the low points just seem so low, and you wonder why you’re even doing this.

Palm: When you’re an entrepreneur, you invest so much — not only money, but your time and your passion for something. The low points can be terrible. I’ve heard a couple of great leaders talk about how depressed they’ve become when their companies are doing badly. I’m amazed, when I meet entrepreneurs, that they can keep doing this. We need those kinds of people to create great companies.

Lebedev: King bought Fabrication. What was King then, and what is it now?

Palm: King has been around for 11 years now. A lot of the original founders are still working very actively in the company. They originally came from a Swedish startup called Spray, where they were working with a lot of cool web ideas.

Lebedev: What was the vision with King when it started?

Palm: It’s changed a couple of times. But it’s been focused on games. Casual, skill-based games were something King was doing for quite some time and leading in that small segment.

Palm: It was a platform for games that was shared with a lot of partners. These skill games were games where you would bet a dollar on the result and you’d be matched with someone of equal skills. If you won you’d get the dollar or whatever it was. But there’s a lot of regulation in that area now. It’s different in different regions. It was fairly big at the time.