Lebedev: How many employees are there at King now?

Palm: Currently we have more than 800 in 11 different offices. We have seven studios where we have game development going. We have a big studio in Stockholm, and then Malmo as well.

Lebedev: Why Sweden? It’s so expensive. It’s like 7 euros for a Coke.

Palm: There was a really good session at the Nordic Games Conference about why Sweden is such a good location. One of the things people said was that it’s very expensive, so we need to develop better tools to automate a lot of the really boring stuff. I found that interesting. Maybe the fact that it’s so expensive to hire people makes it important to be streamlined, to have just a few people doing creative work.

Lebedev: How were King’s earlier games conceived? They had hundreds of games, right?

Palm: Yeah. The website now has more than 200 games. They’re built by very small teams. The concepts can come from many different directions. We have sessions where we essentially do hackathons and brainstorm concepts. It’s just two or three people working for a short period of time to take something from an idea to a game concept that we can have players test.

That’s very important to the success of King. We’ve been able to eliminate a little bit of the risk in taking half of the company to work on somebody’s idea. Instead, we can have a small, agile team do something we can try out and get some numbers on as far as how it works.

Lebedev: I wanted to talk more about King and what’s going on there. One of the things I’ve noticed is that sometimes King’s artwork is really out there. It has a unique look. How do you think the visual aspects of your games affect them?

Palm: If you look at those 200 games we have there, they vary in quality because they’ve been produced over a long time. The games that come out of King now have a more consistent type of polish. One important thing to note is that we try to make our game teams own their product. If they want to go in a certain direction, they should be allowed to do that. That’s an important strength. It’s not so hierarchical. This is typically Scandinavian, I would say. It’s a very flat organization. 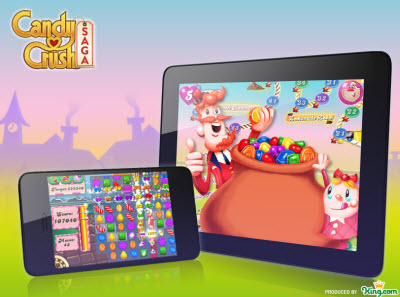 Lebedev: I ask the question because the original Candy Crush game, the Flash game, it’s not the best-looking game. But that’s interesting, because it was King’s most successful game on the site. Or it was in the top five.

Palm: The original art style was a little bit more gritty, I would say? It’s like French 1920 type of candy shop look and feel to it. When we did the Facebook version, we didn’t have a lot of that.

Lebedev: Let’s talk more about that. King traditionally has games on its site. Now the site is called RoyalGames. There’s all these games on that site. Those games moved to Facebook and then to mobile. But the Facebook games and the mobile games are tied together. Can you talk more about the idea behind that? It seems obvious, but it’s probably hard to execute, having a good sync between two different platforms.

Palm: It’s one thing to do that in theory. Getting it to work in practice is a whole different bag. That’s how Fabrication Games and King met originally. It was at a conference. We were presenting the same basic thoughts about what’s going to be big in the future. One of those things was games you could take from one platform and continue on another one.

In the early discussions, when we were looking at designing games like Candy Crush, we all wanted it to be the same game, but with input from PC and mobile. The user behavior there is also quite different. That was definitely a challenge. We took some decisions on the design there to, for instance, make the mobile game available offline. That was really important, but it delayed the original mobile release a bit.

Lebedev: How did you pick which games moved to mobile? Was it just performance?

Palm: Today we have this vision of cross-platform for most of the games we want to do. They work on both platforms. But looking at it originally, it was a process of us transitioning from online games to Facebook games to cross-platform games.

Lebedev: Was Bubble Witch a big success? Like you said, the mobile game wasn’t the best. It was a little bit small.

Palm: The original mobile game was successful, but then we had Candy Crush coming after it, and that was even more successful of course. It was a good iPad game, the first Bubble Witch, but very small and low in detail on iPhone. Also, if you look at the differences for Bubble Witch Saga 2, you’ll see that we updated the colors quite a lot.

Palm: That depends on who you mean. But no.