The game-development business is getting to the point where almost anyone can start their own studio, and that’s exactly the path that many artists, designers, and programmers are taking — but more would still choose to work at Valve if given the opportunity to do so.

The Half-Life and Portal developer is the most-desirable employer in the game-production industry, according to a recent survey from the International Game Developers Association advocacy group. The company, which produces games and runs the Steam digital distribution game network, is the only entity in gaming to top self-employment. The rest of the list includes just about every big-name developer and publisher — although Electronic Arts is noticeably absent.

Check out the full rankings below:

That Valve topped the list isn’t a surprise. The publisher is famous for its flat corporate culture where it encourages its employees to go and work on the projects they want to contribute to. The company is also responsible for some of the industry’s most popular games, including the Half-Life shooter franchise and the multiplayer online battler Dota 2. 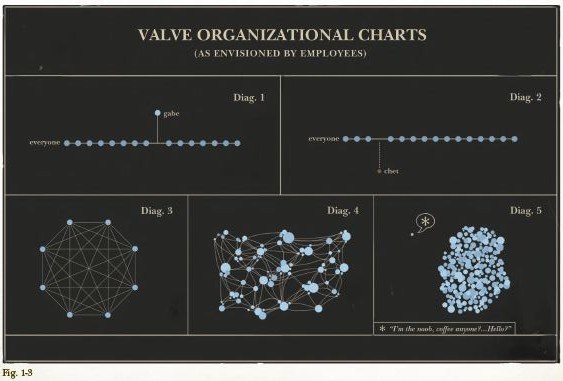 Above: Valve’s humors organizational chart from its employee handbook.

It’s also no surprise that self-employment was No. 2. GamesBeat has previously reported on the trend of well-known triple-A developers, like Gears of War creator Cliff Bleszinski and Civilization designer Brian Reynolds, leaving established companies to form their own studios. At the same time, up-and-coming independent developers are starting out by working for themselves, and they don’t want to give that freedom up to work for Ubisoft.

For this study, the IGDA talked to 2,200 developers. It does this on an annual basis in an effort to better understand the desires of its members.