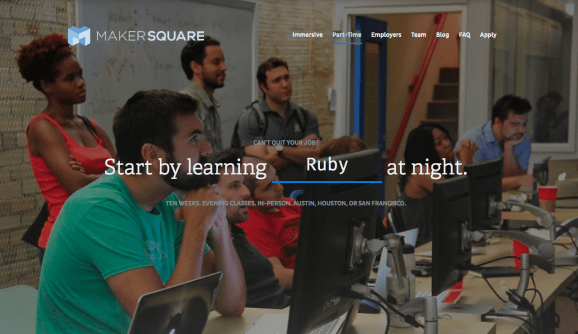 “Bootcamp” schools for teaching programming are receiving billing as career boosters for all kinds of people, but they come with a startling variable — tuition ranging from $10,000 to $20,000 for 12 weeks.

Now, a new startup is hoping to come to the rescue with cash. San Francisco-based LendLayer announced today that it has raised $400,000 in seed funding to set itself up for lending to bootcamp students.

“Ninety percent of students [at bootcamps] are told ‘no’ at the bank” when they come looking for student loans, LendLayer chief marketing officer Steve McGarry told VentureBeat.

Additionally, he said the schools themselves, of which there are now about 120 in the U.S. in a sector that is growing by about 350 percent annually, have been entirely bearing the risk of students who enroll but might drop out because they can’t afford the tuition.

But staying enrolled could be well worth that money. McGarry told us that “about 95 percent [of bootcamp-graduating students] get jobs,” many of which are high-paying positions.

The company came into being when the four founders — McGarry, Sebastian Fung, Matt Gibb and James Lovatt — started calling up bootcamps and assessing the need. All four had direct or indirect experience with financial hardships of attending software or entrepreneur bootcamps. After contacting a few bootcamps in the Bay Area — Hackbright Academy, MakerSquare, Insight Data Science and Hack Reactor — LendLayer found itself with a need for $14 million in student loans, but no money.

“We realized this was a huge painpoint, but an underserved market,” McGarry said. Those initial four bootcamps are now working closely with the effort.

The startup says it is focused on students and therefore intends to evaluate factors other than students’ risk scores, like their future earning potential, bootcamp they’re attending, GitHub commits, work experience, and possibly some unspecified social factors on Twitter and Facebook. This follows a trend where ‘Net-based companies are taking alternative approaches to solving financing needs that banks are not.

LendLayer’s initial funding will help it get set up and licensed in Massachusetts, New York, Texas, and Illinois in addition to California. The initial seed funding was led by Jann Tallinn, a cofounder of Skype, and the startup expects to have enough additional funds to start lending within 30 days.

The lender promises investors a return of 8 percent to 10 percent, while students face an interest ranging from 15 percent to 20 percent. By comparison, a Wells Fargo bank representative told us on the phone that, “if a school didn’t have a relationship with the bank,” the bank wouldn’t make a student loan to attend that school. For institutions with which Wells Fargo did have a relationship, such as a community college, the fixed interest rates generally range from 6.8 percent to 13.34 percent.

McGarry emphasized LendLayer will customize the interest rate and other terms (like the time required for payback). Some interest rates may be lower than 15 percent, he said, while most students will not be required to make repayments until after they graduate. For students who find themselves between jobs after graduation, LendLayer says it might help them find a new job and restructure their student loan.