While the step counters and run tracker apps of the world get most of the attention, a growing number of apps in the marketplace are serving serious clinical needs.

One is AliveCor‘s AliveECG app, which will soon run an algorithm that detects atrial fibrillation (AF), a serious type of heart arrhythmia that’s often a precursor to stroke. For people with a history or heart trouble, or atrial fibrillation specifically, the app and the algorithm could provide a life-saving early warning system.

San Francisco-based AliveCor went through a rigorous process with the Food and Drug Administration to prove the accuracy and efficacy of the algorithm. The FDA is particularly interested in reviewing apps that provide any type of actionable, diagnostic information to users, as AliveCor’s app clearly does. 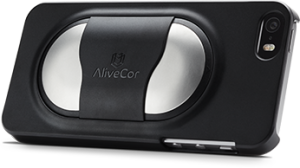 Above: AliveCor’s heart monitor nodule attached to an iPhone.

The AliveECG app runs on a smartphone. The patient places their hand over an AliveCor nodule device that fits over the back of the phone. The app then measures the electric signals being transmitted by the heart and radiating through the fingers, detected by the nodule.

There are lots of types of arrhythmia, but when the algorithm sees patterns in the electrocardiogram (ECG) that are consistent with atrial fibrillation, it can alert the user. The user can then confirm the result by sending their ECG from their smartphone to a medical group in Los Angeles where a board-certified cardiologist can verify the result within 24 hours. This costs the user $12, all of which goes to the medical group.

There is also an option for a technician to read the ECG and return a result within half an hour, AliveCor CEO Euan Thomson told VentureBeat. The user can also send the ECG to his or her own physician.

Thomson says the FDA approval was based in part on the experience of the 6000 or so people who use AliveCor’s device and app. Thomson, himself a medical physicist, says his company has collected a large database of ECG readings from the app. Users can choose whether or not to contribute their results to the database.

The new algorithm will be made available in the (free) AliveECG app in September, Thomson says. The $199 AliveCor monitor device, which users buy at the AliveCor site, has versions that can connect to six recent iOS devices, four Samsung Android phones, and one HTC Android phone.