Disney Interactive has found a fan-friendly way to tie the Clone Wars into a game that takes place after Luke Skywalker has turned the Death Star into a space junkyard.

Star Wars: Commander, a free-to-play strategy game that debuts worldwide for iPhones and iPads today, depicts the Rebel Alliance as a force that must scrounge for its gear, not necessarily manufacture it all, in order to face the Empire. This isn’t something you see in Star Wars strategy games, where the Rebels have access to loads of tech that’s not in the films and that’s roughly on par with the Imperial Army and Navy (this was especially egregious in 2006’s Empire at War for PC). Here, the Alliance has turned to leftover Clone Wars weapons to take on Darth Vader and his legions of AT-ATs (All Terrain Armored Transports) and Stormtroopers.

“The whole idea is that [the Rebels] are trying to pull from all the sources of the past that they can to bring forces to bear against the mechanized might of the Empire,” said Lucasfilm executive producer Matt Fillbrandt on Monday at its Presidio campus in San Francisco.

In a trailer I saw during a demo of Commander, the Rebels throw HAVw A5 Juggernaut tanks, AT-APs (All Terrain Attack Pods), and even leftover Separatist tech like missile-bearing IG-227 Hailfire-class droid tanks along with the standard mix of soldiers, speeders, X-wings, and Y-wings.

“In this time period, the Rebels, although they have established themselves as a threat to be reckoned with and get the attention of the Empire, they don’t necessarily have the industrial capability that the Empire has to churn out AT-ATs and AT-STs [All Terrain Scout Transports], so they’re very much looking to bring older technology up and repurpose it,” said Fillbrandt. “So it sorta gives them a familiar feel by repurposing Clone Wars-era tanks both from the Separatist side — we have a droid tank in the game that has been repurposed for organics to use — [and the Republic]. We also have other vehicles that people might recognize as well.”

This is Disney Interactive’s third Star Wars game since George Lucas sold his empire to the House of Mouse in late 2012. You begin as a smuggler on the planet Tatooine, but galactic events following the Empire’s loss of the Death Star force you to choose sides. As a battlefield commander, you build a base and gather resources to build both offensive and defensive forces. You play through a series of missions in a story-driven campaign that uses the time between Star Wars: A New Hope and Star Wars: The Empire Strikes Back as its backdrop — and through Star Wars: Return of the Jedi and potentially beyond, notes Nathan Etter, the vice president of studio operations at Disney Interactive. You’ll find plenty of familiar planets and events.

“We know it’s important to our fans to have encounters that feel iconic and tie to the Star Wars cinematic experiences that they know very well,” Fillbrandt. “So we’re kicking the game off on Tatooine, and that will be a very iconic location for them.

“We worked closely with the Lucasfilm story team to give this game a place to play that’s fresh and unique and not stepping on the toes of other projects.” 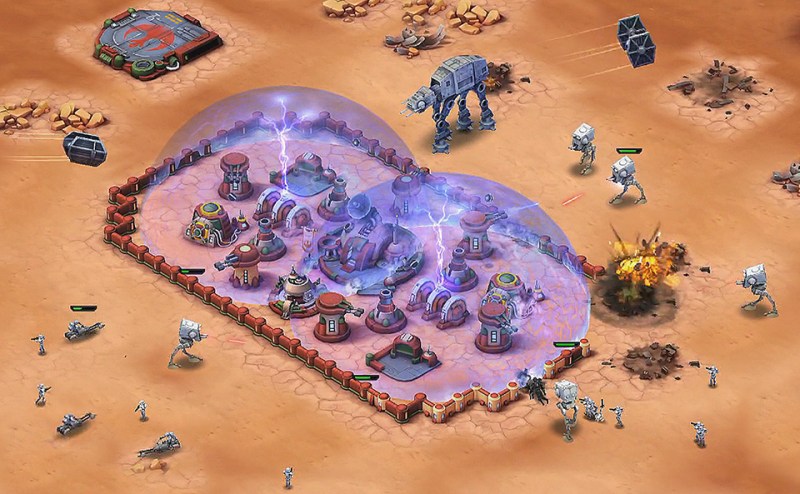 Above: AT-ATs and AT-STs attack a Rebel base protected by a shield generator, foreshadowing future Imperial strategy.

The likes of Han Solo, Princess Leia Organa, and Chewbacca are in Star Wars: Commander. It also has some new characters. It uses three forms of currency (two in-game and one premium, crystals, that you pay actual money for). You build bases and armies and send them to attack either computer-controlled forces in the story-driven campaign missions or other in player-versus-player battles. You use the crystals for in-app purchases that speed up training times for your troops between battles. Fillbrandt and Etter both talked about this having future content drops, so look for more units and missions as this game gets bigger after release.

“All of the content in the game is free. You can access all of the chapters, the storyline, participate in player-versus-player combat, and unlock all of the rewards for the timed campaigns,” Etter said. “All of that is free.”

Unlike some mobile strategy games, such as the hit Clash of Clans, players don’t join large groups and attack other people’s holdings. But they can join groups called Squads with friends. Etter said that player-versus-player tournaments should appear sometime after launch, but he didn’t give a specific time-frame.

“You can work together and trade troops” in Squads, Etter said. “But you don’t band together to attack one person’s base, for example.”

Commander recognizes that Star Wars fans are a broad group these days, encompassing those whose first experience with one of sci-fi’s most iconic franchises was from the original trilogy and also younger fans who think of the prequels first. And Disney Interactive’s tack shows that game designers might be able to make something that appeals to both.

“It should still [be] familiar for fans across 30 years of the films. Some know the classic era really well, and we think that this game set in that time period will speak very well to them,” Fillbrandt said. “But we’re also going to have some fans that grew up with the prequels, the Clone Wars animated show, and they’ll also find some things in here that look familiar to them as well, so it is intended to be sort of a broad offering, but also makes sense in an authentic way for Star Wars in this time period.”