The spiritual successor to Flappy Bird is here, and it’s hard enough to make you say some very inappropriate things even in front of your grandmother. Don’t worry! We can help.

Maybe you were great at Flappy Bird. Maybe your high score was 250 in that game, and so you were expecting to dominate the leaderboard in Swing Copters. After all, the two games are similar. You guide a graceless character through some obstacles by tapping the screen. It’s basically the same thing, right? Well, one problem: Your Flappy Bird skills won’t translate into Swing Copters success. Instead, you’re gonna have to change some things if you even want to get past the first gate.

With that in mind, we’ve put together a few tips that may help you improve your score.

Before you do anything, keep in mind that Swing Copters isn’t a game where you’ll consistently manage double-digit scores. Hell, I’m writing a tips guide, and my best round is only 8. While that might seem like a bummer, it actually means that you don’t need a 3 minute-long session to beat your friends. Try for 15 seconds. If you fail, try again. When you start getting past the first gate consistently, you can the start trying to figure out how to keep that momentum through the second.

Swing Copters is hard, but its short rounds mean you can actually start getting the hang of things without having to invest a huge amount of time.

2. Don’t spam taps at the start 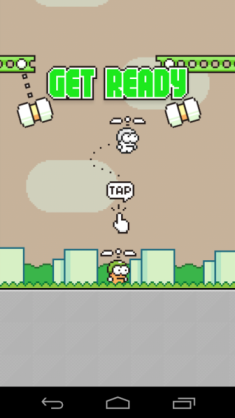 Above: Just tap once at this point and then wait until he is airborne before tapping again.

When you begin a round of Swing Copters, the game prompts you with “tap.” This might make you repeatedly tap the screen to launch your character off the ground. Do not do this.

You just need to hit the screen once at the very beginning. You then wait for the guy’s propeller to start working until it lifts him off the ground. That’s when you should enter your second tap. By doing this, your character will always start by flying to the right, which makes getting past the first obstacle much easier.

I probably spent my first 15 minutes just trying to score my first point, and that’s because I wasn’t following this rule

3. Move with the hammers

Unlike Flappy Bird, Swing Copters doesn’t just have static barriers for you to move past. It also has giant hammers that swing on pendulums on each side of the narrow openings. This creates situations where it looks like you’re going to make it through, but those swinging obstacles get you at the last moment.

Well, if you want any success in Swing Copters, you must learn to move with the hammers. Yes, controlling the character is already challenging, but you’ll need to learn to dodge those big mallets as well.

Ideally, this means that you need to weave through the center of both hammers, but that’s probably too difficult. So here is a quick tip: Simply try to favor the side that has the hammer swinging out. If the right hammer is swinging from the center to the outside, you should then try to have your character on the right side of the opening.

Flappy Bird had a distinct rhythm to it, and so does Swing Copters. You have to constantly tap the screen to change direction or else you’ll hit the wall or an obstacle. If you play long enough, you should naturally come to learn this game’s beat. But let’s give you a head start on that.

5. Don’t rapidly tap the screen unless you’re in a crisis

Whatever you do, don’t just slam on the screen with taps. You might think that this is a good strategy to quickly press the screen a dozen times to make sure you go back and forth quickly when you need to go straight up. That might work for a moment, but you’ll almost always lose control after doing this.

The problem is that hitting the screen even only twice in quick succession causes the character to pick up a ton of lateral speed. Before you have time to react, your little copter man will have already gone splat against the wall.

The only time you should ignore this rule is if you already feel like you’re going to lose control, and you just want to score that one last point to beat your friend. Sure, your game will end, but at least you can make that Hail Mary attempt before wiping out.