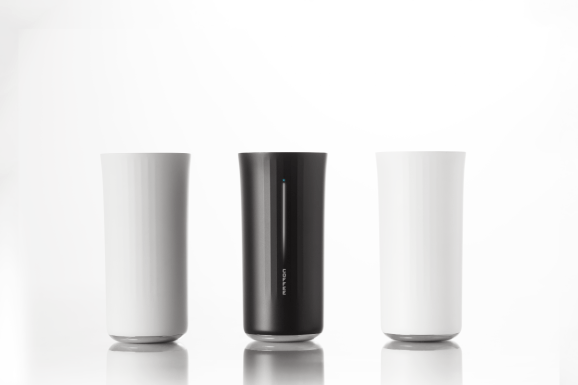 While most of us continue to make fun of smart cup Vessyl, it keeps on going. After selling $1 million in pre-orders and hiring former Apple and Nike execs, Mark One, the company behind Vessyl, is revealing today that investors gave it money before any of us even began to write our “smart cup” jokes.

Mark One announced today that it closed $3 million in seed funding to make some new hire and to help with the manufacturing process.

Vessyl, Mark One’s first product, is a cup equipped with sensors that detect what is inside the cup, and it displays a variety of data about the cup’s content both on the cup itself and through a mobile app. Pre-orders opened in mid-June, and it has since sold out. The cup is slated to ship in “early 2015,” founder and chief executive Justin Lee told me.

But as I’ve written before, however silly this all sounds, something must be brewing under the smart cup’s cap as it keeps attracting top talent and investor interest. Mark One enlisted Felicis Ventures and Horizons Ventures to co-lead this funding round, along with participation from Collaborative Fund among others.

Collaborative Fund founder and partner Craig Shapiro actually has a personal interest in the Vessyl. Lee told me that he met Shapiro back in 2011 when he was still in the research and development phase, and Shapiro immediately took interest as he was already in the habit of carrying a water bottle around, largely to stay well hydrated at all times. He also shared with Lee how much better regular hydration has made him feel, especially as an avid runner.

China is on Mark One’s map

Companies choose their investors for a variety of reasons, but Mark One was particularly interested in Felicis Ventures, which recently closed a new fund, and Hong Kong-based Horizons Ventures because of their investors’ experience with markets outside of North America.

“One of the things that we’re noticing is that international is becoming more and more important as we look at the data,” said Lee.

Although Mark One closed the round before it launched its pre-orders campaign, Lee told me that the company has gotten orders from more than 75 countries. This international interest is largely the reason why the company has decided to ship a second batch and widen the opportunity to customers in as many countries as possible. It’s also why investors with international experience will come in handy. Felicis Ventures has invested in Finland’s Roku and Canada’s Shopify, among other international investments, and Horizons Ventures, Li Ka-shing’s venture capital firm, has invested in a number of countries.

Ka-shing and Horizons also have a particularly strong foothold in China, where Ka-shing is chairman of Cheung Kong Holdings, an multinational conglomerate whose portfolio includes retail.

“Li Ka-shing has some great relationships in China. And we’ll think about when the right time is to make China a big focus of ours. For any company, China is important, and that’s some conversations we’re having with Horizons about what we should do there,” Lee told me

Frankly, it’s not hard to imagine Mark One getting on retail shelves in China and other parts of Asia as quickly as it can in North America with those relationships.

Lee also told me that Horizons Ventures’s Bart Swanson is also personally interested in the Vessyl and its purpose, though he wasn’t quite sure if Swanson has pre-ordered his own yet. “I would think so,” he said.