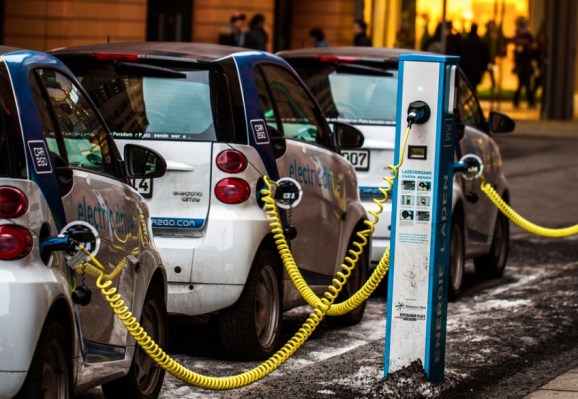 Public charging for electric vehicles is currently an adventure. Just finding a charging station can sometimes be a challenge.

The most common way to locate charging stations in unfamiliar areas is to use a locator app on a smartphone.

There are several available, but one of the more popular is provided by the ChargePoint network of charging stations. Its app not only locates charging sites, it displays the real-time status of the station: available, in use, or unavailable.

However, most electric-car drivers I know use PlugShare today — in part because it also includes residential locations where people are willing to let an electric-vehicle driver plug into their home charging station.

ChargePoint says its goal is to be the #1 app used by electric-vehicle drivers.

This may be an uphill battle, as most electric-car users find the tips from actual users of the individual sites to be one of the most useful features, and there, PlugShare has the clear edge.

I checked several stations near me, as well as various locations across the country, and many had dozens reviews on PlugShare, but none yet on ChargePoint.

But perhaps as public charging stations become the norm, it is possible people won’t feel the need to check an app that includes private stations.

The previous generation of the Chargepoint app gave useful information but felt clunky and unrefined.

For example, every time you opened the app you had to wait at least five seconds before it “found” you and your local charging stations. This was particularly frustrating when all I wanted to do was check the charging status of my vehicle.

Its symbols were rather simple, and it felt like it had been designed for programmers, not for drivers and riders.

The new app has a significantly upgraded interface and a few new features.

On the map view, the new App shows how many plugs are available for electric cars to use. You can tell how many are already in use by the pie chart that surrounds the central number.

The main way to initiate a charging session used to be either a ChargePoint card or an RFID-enabled credit card. The new App now lets you start a session using your phone just by tapping the screen.

Many electric-car drivers who use public charging stations have Chargepoint cards, but those will no longer be necessary. This is a welcome upgrade, and it reduces the number of charge-network access cards you’re required to carry to cover all bases.

Generally you know how much charge you need to get to your destination, and so far, ChargePoint is the only charging company that delivers this information.

Now the company has made it even easier, by setting the Charging Status screen to be the default screen while your vehicle is actually charging.

You could do this with the previous app, but you had to switch screens and wait for irrelevant information — your location and nearby charging stations — to load first.

Once your vehicle is charged, the new app can be set to send a text message or email to your smartphone to let you know it’s done.

This also offers peace of mind, because it will let you know if your vehicle has been unplugged by another person. This is rare, but it does happen sometimes.

The ChargePoint App also includes predictive searching: The app autofills your search with recent searches or nearby destinations. You can also choose which map service to use; options include Google Maps, Apple Maps, and Waze.

A satellite view of parking lots or structures is intended to let you see the exact location of a charger in a parking lot, so you don’t have to drive around searching for it when your battery is low. This can be hit or miss, though, since some charging locations appear to be inside the building they’re actually next to.

I found the new app to be fast: very fast. It took less than 2 seconds to load, even when using cellular data service, and the stations loaded quickly as well.

But the ChargePoint app continues to have some features that I find to be poorly designed.

One is that it clusters stations together when the map is zoomed out. Sometimes clusters can include stations on opposite sizes of a river. ChargePoint clearly made a conscious decision to do this, but I find it strange.

Another feature that wastes valuable time is that the app automatically zooms to the street level of a station before you can select it to learn where it is. It seems odd that a user can’t just select a charging station while zoomed out.

Finally, when you designate a station as a favorite, the little heart pointer overlaps the station, which gets in the way–meaning you can’t select the station easily. Instead you must zoom in very close (or have incredibly deft fingertips).

This doesn’t seem like good design for people who may be behind the wheel while looking for a charging station. (Please, always, stop and pull over before using any app on your smartphone!)

ChargePoint made sure to note that its App will continue to evolve and gain more usability features.

The company is already the leader in providing useful information, by telling the driver how fast the vehicle is charging as well as how much charge has been transferred.

In the future, the app may include a way for a station to communicate with drivers waiting for another car to finish charging, to inform them that the station has now become available.

At stations that charge a fee for recharging services, the new App shows the rate of charge and the fee — but does not track the cost in real time. That function is also under development.

With new features and an updated interface, ChargePoint hopes that its app will become the leader in charging station mobile applications.

The company’s app is certainly have the most useful one once an electric vehicle is plugged into one of their charging stations.

The Android version of the new ChargePoint app is available today, and the iPhone version will be available at the end of August, 2014.