San Francisco held its own demonstration in front of a city police department in solidarity with the protestors of Ferguson, Missouri, and the demonstration quickly devolved into an anti-tech gentrification rant. The fallout from Ferguson influences the nation as a whole, and it may likewise fuel the battle between tech and local residents in San Francisco.

“Fuck the yuppies,” chanted the group, led by an organizer with a megaphone, as police peacefully escorted them down the very street where activists protested Google’s private charter buses earlier this year.

Primarily, the demonstration was against the militarization of police departments and was inspired by the city-wide protests in Ferguson over the killing of Michael Brown. But why protest in front of a small San Francisco police station? 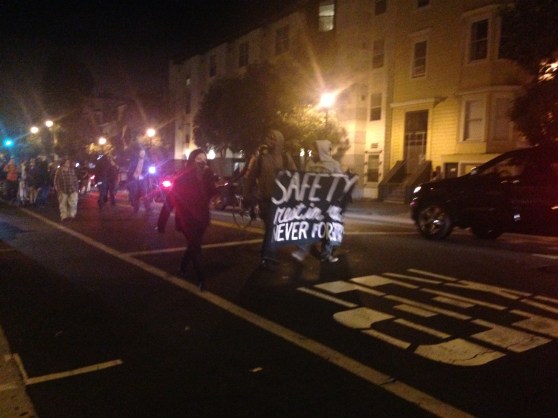 “They’re just as complicit as the Ferguson police department,” one demonstrator told me. “They’re killing babies!” shouted another demonstrator at side-walk bystanders.

As the group, which numbered about 150, headed through the Mission District, it became clear that there was a strong connection between the recent uproar over tech gentrification and the anti-police sentiment of the crowd.

As the crowd strode past one of the very few new housing developments on Mission Street, the organizer switched from “Fuck the yu-ppies!” to “That is ug-ly!” The Mission District has undergone a housing crunch thanks to the influx of young tech workers and others who work in the San Francisco Bay Area but want to enjoy the hip neighborhoods of urbanized living. 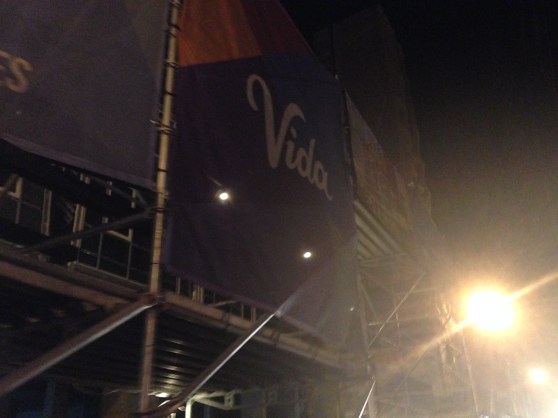 As a result, housing (rents and ownership) is no longer affordable for many of those living in San Francisco. The simplest solution is to build more housing, but area city councils, in San Francisco and beyond, have routinely rejected increased development.

Some protestors don’t want to see the quaint three-story neighborhoods become like Manhattan; others tell me what they want is 100 percent affordable housing reserved for existing residents before any new techies can move in.

In the Mission, the confluence of a tech-driven economic boom and political gridlock has caused sky-high rents and increasing gentrification of a strongly minority neighborhood.

Many of the protestors alluded to deaths of minority residents caused by Bay Area police, which include Oscar Grant in Oakland, whose death was portrayed in the Hollywood movie Fruitvale. The protesters argued that the very presence of white people has caused aggressive activity toward minorities in the neighborhood.

“There’s also been increased policing of people of color in the Mission as part of an effort to clean up the Mission for people with wealth and people with money to make it more comfortable for them who aren’t comfortable living amongst populations,” another demonstrator told me.

It’s hard to tell how representative these protesters are of San Francisco’s population. A University of California, San Francisco study found that a majority of San Franciscans think tech is good for the economy (68 percent), and there was more agreement than disagreement that the city should encourage tech companies to move to the city [PDF].

The city’s chief economist also finds the tech boom has been generally good for the economy, with wages rising 2 percent faster than inflation.

But it’s clear the most vocal elements of the anti-gentrification movement are part of a class that feels outnumbered, whether they be wealthy technologists or the police. If the protests in Ferguson turn into a movement, or influence policy around the country, it may inflame the current anti-gentrification movement in San Francisco at the same time.