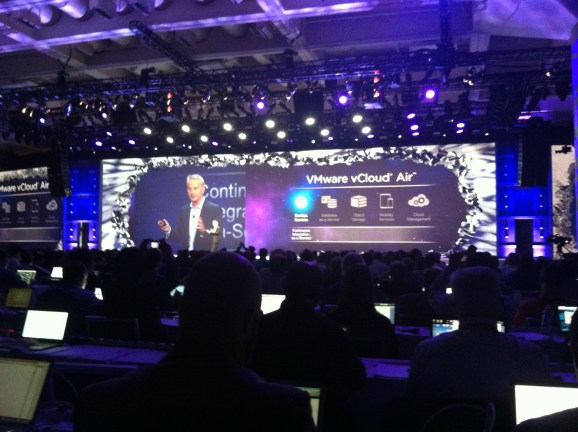 SAN FRANCISCO — Enterprise software company VMware has announced some new features of its public cloud, much the same way as market leader Amazon Web Services and other competitors have been doing on a regular basis for years.

Those new features include an object-storage service; support for relational databases like MySQL and Microsoft SQL Server; and a cloud-based continuous-integration for testing out code. These are on the way for the vCloud Hybrid Service — oops, make that vCloud Air, the new name for the cloud — Bill Fathers, executive vice president and general manager of hybrid cloud at VMware, said today.

Amazon, Microsoft, and Google (the three most aggressive public cloud providers) already offer the first two of those three features.

“We’re also going to offer disaster recovery for vCloud Air for on-premise relational databases,” Fathers said during his keynote during VMware’s VMworld conference here this morning. Such capability broadens the VMware public cloud’s value as a supplement to companies’ private onsite data centers, where VMware does much of its business.

VMware will pick up some distinction for its cloudy continuous-integration service, which tends to be separate from the cloud infrastructure provider. For instance, there’s CircleCI, CloudBees, Codeship, and Drone.io.

As VMware is shipping new stuff for its cloud like Amazon and the others, it’s not necessarily playing catch up so much as creating a cloud that’s just right for VMware customers. That includes mobile-device management software from VMware’s recent AirWatch acquisition as well as a new mobile backend as a service for building and deploying mobile applications — which apparently VMware customers need just as much as, say, Amazon or Microsoft cloud customers do.

Companies must now be able to change quickly, like water, which can take different forms, Gelsinger said.

“How fast can you have organizations move in this liquid world?” he said.

The question worth asking now is whether VMware will be able to woo non-VMware customers exclusively by virtue of its cloud.