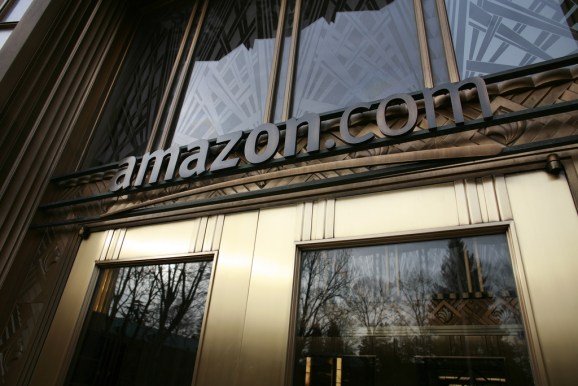 While the details are hard to come by, it’s becoming increasingly obvious that Amazon is getting ready to make some sort of play in consumer health.

At Rock Health’s Health Innovation Summit last week, Dr. Babak Parviz, the former Google X director credited with inventing Google Glass and the glucose level-detecting smart contact lens, was coy about what Amazon is building even after several people asked him to comment. It was, however, clear by the look on his face that something is indeed in development.

Parviz talked about the use of Google Glass by doctors during an onstage interview at the Rock Health event. Parviz moved from Google to Amazon in July to fill an unnamed position. He has said little about what he’s doing there.

At Google, Parviz was also involved in the development of a contact lens that reads blood sugar levels from the chemical content of tears. He is obviously excited about the health space.

Rumors have circulated that Amazon will jump into the industry next year, possibly with a health platform like Apple’s Health Kit.

It’s possible. Amazon added 30 million new users last year to bring its worldwide user count to more than 200 million worldwide. With that kind of reach, it could sell a wide variety of health wearables and provide a technology platform where health data collected by those devices could be stored and accessed by both consumers and app developers.

It’s also possible that Amazon is working on health wearable hardware of its own. Amazon CEO Jeff Bezos has shown that he is not afraid to jump into hardware projects if he believes their goals align with those of  the mega shopping site. The Fire phone is the prime example, a device that could have applications in the health space itself. (See: Amazon’s Fire Phone might be a boon for health apps)

Another clue dropped yesterday with reports that Amazon has held at least one conversation with the Food and Drug Administration. According to the FDA’s meetings calendar, on July 22 “Amazon leadership” met with the agency’s deputy commissioner for global regulatory operations and policy Howard Sklamberg and some other FDA employees.

Apple and Google have also held meetings with the agency, and both companies already offer a consumer health data platform.

Amazon may have discussed a health platform or device with the FDA, too. However, it may also have discussed the idea of selling prescription drugs on Amazon, an idea the company has considered before.

“Howard, the guy they met with, obviously is one of the most high-ranking officials at the FDA on the policy side,” says Epstein Becker Green lawyer Brad Thompson, who helps medical device makers work with the FDA, in an email to VentureBeat.

“Indeed, at the commissioner’s office, he is above the Center for Devices and fairly removed from the day-to-day policymaking with regard to medical devices. His responsibilities are so broad that they include drug policy and the operations of the FDA field force. So I have obviously no idea what they might be talking about, but it could include even the sale and distribution of drugs and medical devices,” Thompson said.

On the other hand, Amazon has been making a big deal of wearables at its site. “I saw recently where they have a new wearable store within the Amazon site,” Thompson notes. “It seems to me that perhaps they might be trying to stitch together existing wearables into some sort of system, and perhaps even considering their own platform involving their phone.”

Could very well be, but we’ll probably have to wait for a few months to find out.