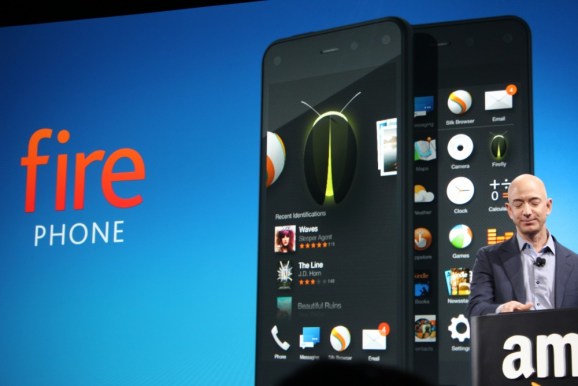 35,000. That’s the maximum potential number of Fire Phones Amazon has sold so far, according to an estimate by The Guardian’s Charles Arthur.

Using data from Chitika’s ad network and Comscore’s smartphone user data, Arthur came up with a figure that, while not definitive, gives us a sense of how many Fire Phones are actually being used in the wild. And if it’s even vaguely accurate, it’s a terrible result for Amazon.

It wasn’t hard to see the writing on the wall for the Fire Phone (read our review here). With its high-end price ($200 on contract, just like every other top smartphone), exclusivity to AT&T, and lack of any defining features (Amazon’s “3D-like” interface was pretty much a gimmick), the Fire Phone was a tough sell from the beginning.

The ultimate problem? With the Fire Phone, Amazon ended up serving itself more than it actually served consumers.

The phone’s “Firefly” option, one of its few interesting features, which lets you quickly identify an item with the phone’s camera and order it on Amazon, is a barefaced attempt to drive more sales. Its high price mainly serves to make Amazon seem like it’s competing on the same level of Apple and Samsung rather than offering consumers a better value than those established competitors. In the end, Amazon didn’t give anyone a reason to buy the Fire Phone over the iPhone or the plethora of increasingly polished Android devices.

VentureBeat is studying mobile app analytics.
Fill out our survey, and you’ll get access to all the data.

Now, two months after the Fire Phone was announced and a month after it went on sale in the U.S., it doesn’t seem like there’s any path to success. Even if Amazon drops the price significantly, other companies like Motorola are already focused on low-cost, fully capable smartphones, which notably aren’t locked out of the Google Play app ecosystem and Google’s core services like the Fire Phone.

There’s probably not much Amazon can do at this point to revive the Fire Phone, but hopefully the company can learn a few lessons from this failure as it readies its followups. And, yes, you can bet those are coming.

The smartphone market is too important for Amazon to give up entirely. But until it figures out why, precisely, consumers should buy its phones, Amazon will struggle to compete.

I also wouldn’t be surprised if it decides to just snap up a smartphone manufacturer out of pure desperation. Yesterday’s $970 million Twitch acquisition, while surprising, shows that Amazon isn’t afraid to go big to invest in new markets.