Mobile internet revenue will hit $700 billion annually in less than three years, according to a new report by research firm Digi-Capital. 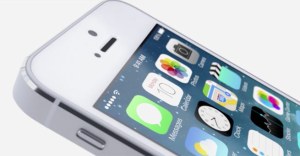 Mobile commerce, mobile advertising, in-app purchases, an emerging app-as-a-service model with mainly subscription revenue, and of course, maniacal attention on the part of app makers to their key metrics.

“mCommerce will be the dominant business model, with $516 billion in sales driving more than 70 percent of all mobile internet revenue by 2017,” Digi-Capital’s Tim Merel told VentureBeat via email.

That’s Amazon.com, sure, but it’s also Wal-Mart. And buying your groceries at Publix. And using digital wallets to pre-order food on your way to the take-out restaurant, so it’s ready to go as you arrive, no questions asked and no cash required.

In other words, the driver is the ongoing colossal shift of commerce to digital, and within that, largely to mobile.

“Mobile advertising will deliver $52 billion in revenue in 2017,” Merel says.

$42 billion of that will be mobile web advertising, he predicts, while $10 billion will be in-app advertising. That’s a bold prediction, given that 80% of our mobile device time is currently spent in-app, as multiple studies have shown.

The third key driver is well-known to mobile developers and marketers: in-app purchases.

Last year in-app purchases of gems and cute virtual designer outfits took in over 90 percent of all consumer app revenue. By 2017, Merel says, the in-app purchase model will drive over $74 billion in mobile commerce — especially in games. According to Digi-Capital’s recent mobile internet investment review, in-app purchases monetize four times more effectively in mobile games than all other app types.

And that effectiveness is stimulating the emergence of the fourth key driver, the app as a service.

“New app as a service models are using the cloud to move beyond standalone device based apps, with free thin client apps such as Dropbox mixing data and media in cloud and on device,” Merel says. “Real-time cloud-based content updates are keeping users engaged, with strong ‘live ops’ teams supporting them.”

“AaaS” models use subscriptions, as well as other revenue models, to disrupt both enterprise mobility and non-game consumer apps. One example, as used by FitBit or similar fitness-monitoring devices: Sell the device and provide the app “for free.” Others, such as BodyMedia, have charged subscription fees to access the health data collected by their devices.

One final factor driving the explosion of mobile commerce by 2017 is simply that the best mobile monetizers just keep getting better. 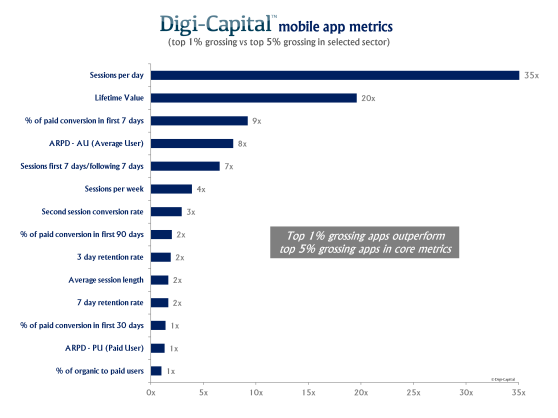 “Top-grossing apps look very different to other apps beyond just making a lot more money,” Merel says. “We see up to 35 times outperformance on core metrics comparing top 1 percent apps to top 5 percent apps by sector, with even greater gaps against lower rankings. For investors and entrepreneurs, a detailed understanding of how these numbers work could make the difference between good and great.”

The top 1 percent of apps — the prototypical creme de la creme — get 35 times more sessions per day than the top 5 percent, which are in pretty rarified territory themselves. They also have 20 times the lifetime value, nine times the conversion to paid rate, and 8 times average revenue per day per user.