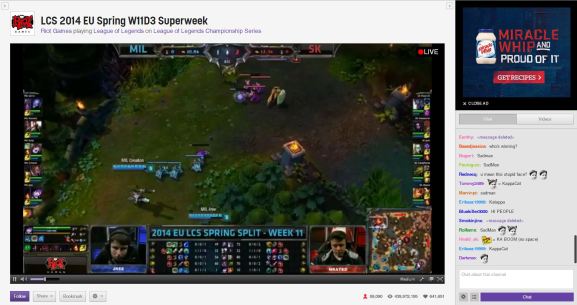 Popular tournaments broadcasted on Twitch, like those for League of Legends, will continue to bring in big PC audiences for the foreseeable future. And now Amazon can make use of these viewers.

On Monday, Amazon announced it was buying Twitch, the hugely popular video-game livestreaming site, for a $970 million in cash. This is a figure not far off what Google paid for YouTube back in 2006 ($1.65 billion). The message again is the same: Online video is king.

But we’re still only in the infancy of the market.

We’re in Version 0.1. if you will. We haven’t even reached 1.0 yet. If Disney’s acquisition of Makers Studios for $500 million-plus back in March didn’t stir the online video industry, then this move most certainly will have them sitting up in their beds — especially because it emphasizes cross-industry interest.

We all know Amazon is an e-commerce company, a totally different beast to Disney, who specialise in content creation. Yahoo also reportedly put in an offer for Twitch, and at the start of the year, it made an offer of $250 million to buy Fullscreen, a leading YouTube multichannel Network (MCN). According to some reports, Sony and Microsoft also expressed interest in acquiring Twitch. They are all very different giants but all united in their interest in online video realities. Buy why?

Much has already been said about Twitch’s 55 million monthly users. It’s a high figure, but actually, it’s not that high when compared to YouTube and it’s upward of 1 billion users a month. What is particularly impressive about Twitch is the engagement level of its streamers and viewers.

While most of the Internet is awash with easily distracted people who are swept up and away with the click of a mouse, Twitch boasts an engagement level of 100 minutes. Compare that to YouTube’s average engagement of 227.82 seconds and Google’s 188.54 seconds and Twitch is winning by some stretch.

This level of engagement is great for raising advertising revenue — it signals that people are particularly receptive to links offered during games, and moreover, they have free time and are thus more likely to spend significant time discovering new content postclick. So it came as no surprise when news of “Amazon Sponsored Links” leaked on Monday, too. Not only has Amazon trumped Google in the acquisition of Twitch, but it may well have devised its own strategy to capture the growing digital advertising budget by entering a new space. Amazon looks set to reap a huge amount of ad revenue on the back of this acquisition. (By 2016, digital ad revenue is predicted to be north of $160 billion.)

So what does Amazon’s acquisition of Twitch signify for the industry? Well, it signifies the start of a pattern of acquisitions for online video properties, producers and platforms as the industry keeps evolving and the giants battle it out to get a slice of this highly lucrative pie. Online video 1.0 awaits.