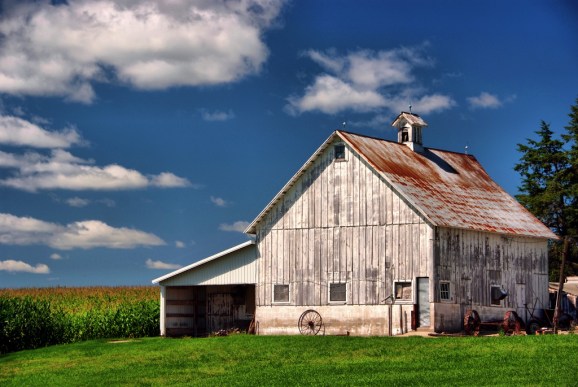 Silicon Valley startups like Uber, Lyft, Airbnb, Lending Club and others that empower people to get what they need from each other command extensive market attention and sky-high valuations. This Collaborative Economy prospers on the rise of local neighborhoods in home-sharing, friendly human connections with fist bumps in peer-ride sharing, and the ability to share money with each other at better rates than banks.

A year ago, I spoke with an insurance company in Iowa. They shared with me that, while these new startups are interesting, they aren’t really anything new. They reminded me that the Midwest has been participating in these friendly behaviors for a century and a half. They said “Jeremiah, this isn’t new. It’s called being a good neighbor.” What they said stuck with me for months until I decided to understand how Silicon Valley is trying to emulate Midwestern values.

Being a Silicon Valley resident, I asked my Midwestern friends to share with me what Midwestern values mean to them. I tweeted a call for responses, then graphed how people responded. While there was always some variation, a major theme developed around a strong work ethic, modest integrity and helping others. These three tenets formed a common thread: I heard from my colleague, Angus Nelson of Wisconsin, about “the value of working hard”; and from Ben Smith, a Kansas City resident, about the classic Midwest value of integrity: “Your name and reputation are your most prized possessions.” From Zena Weist of Kansas City, I learned about helping others, “A stick of butter and a smile, and no need to pay me back.”

So, how are Silicon Valley’s latest Collaborative Economy startups stacking up to these Midwestern values?

To start with, both the Midwest and the Silicon Valley share a similar work ethic. While Silicon Valley workers start the day later than Midwestern farmers, who are up and at it hours before dawn in the heartland, they do work well into the evenings and even on weekends. Tech startups offer many employee benefits to keep people on campus, enabling satisfying, round-the-clock environments. Despite different working hours, both Silicon Valley and the Midwest share the same ethic of hard work.

Yet, while folks in the Midwest take pride in their individual integrity and humility, Silicon Valley has some lessons to learn here. From
ride-sharing companies fighting dirty to unethical executive behavior, from a self-righteous 1 percent viewpoint to the further divide of the rich and poor, Silicon Valley’s meritocratic culture means those that win win big — and think they have a divine right to flaunt it. I’ve seen many a roaring Ferrari or whirring Tesla in front of makeshift homeless tents in San Francisco’s tech neighborhood, the SoMA district, where I often work.

The Midwestern value of helping others without expecting reciprocation is best summarized by the “stick of butter and a smile” axiom when a neighbor is in need. Silicon Valley’s traditional come-get-mine attitude rewards the disruptors and the fiercest competitors. While San Francisco boasts that nearly one of every eight residents are millionaires, a vast majority are not living at middle class standards and are struggling just to get by. The potential for a backlash is rapidly increasing.

When it comes to the three major Midwestern values that Collaborative Economy startups are enabling: Strong work ethic, modest integrity, and helping others, Silicon Valley, as a whole, still has a lot to learn.

But with that, we should acknowledge that the new technologies that enable ride-sharing, home-sharing, and money-sharing are built on powerful platforms like social networks, mobile devices, and apps can extend the barn-raising spirit to all cultures beyond the Midwest.

These new technologies are enabling us to connect to strangers in a human way, as trust data is collected from ratings and rankings features, from social networks for verification of social circles and from mobile devices to help us navigate and find idle cars, homes, and goods.

Remember that Iowa insurance company who appropriately corrected me for glowing over the new Collaborative Economy as just being a “good neighbor”? I responded that these new technologies enable all of us “to be good neighbors to strangers.” They agreed.

We can all benefit in this Collaborative Economy, enabled by both empowering Silicon Valley technologies and Midwestern ethics, leading to further integrity and neighborliness.

Jeremiah Owyang is the founder of Crowd Companies.