Kim Kardashian: Hollywood from Glu Mobile was the most downloaded app of July, according to a report released today by market researcher App Annie. 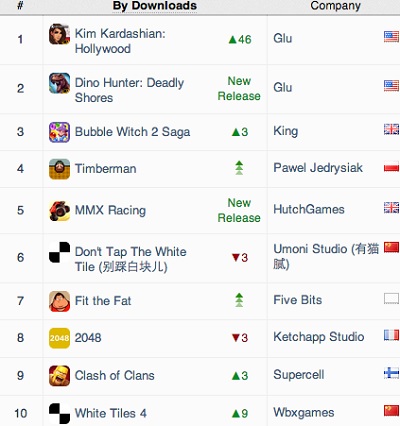 The Kardashian title, where you start as a starlet and try to build your career in Hollywood, rose 46 slots in the month to end July as the No. 1 most-downloaded title in the world on iOS. Glu Mobile also had the No. 2 title with Dino Hunter: Deadly Shores, followed by King’s Bubble Witch 2 Saga, Digital Melody’s Timberman, and HutchGames’ MMX Racing. That shows that the most-downloaded game rankings are still subject to change as new hits sweep through the market.

But in terms of dollars generated, the top ranks are still the same. By revenue, Europe’s King was No. 2 in the world, followed by Japan’s GungHo Online Entertainment, Line, and Mixi. Supercell was still the No. 1 revenue maker in the world when it comes to the combination of iOS and Google Play on a worldwide basis. It owes that to top hits like Clash of Clans, which was No. 1 in combined revenue for a game. Supercell’s Hay Day was also No. 6 in revenue.

By the measure of combined iOS and Google Play downloads, King was No. 1, Gameloft was No. 2, and Glu was No. 3. The latter was aided by the rapid rise of the Kardashian game.

App Annie said that Glu got a huge boost by serious mainstream news coverage of the Kardashian title. The game received 68,000 reviews in the month of July, more than all the other new releases in the iOS top 10 downloaded titles combined. Get ready for a flood of celebrity apps, App Annie warned. 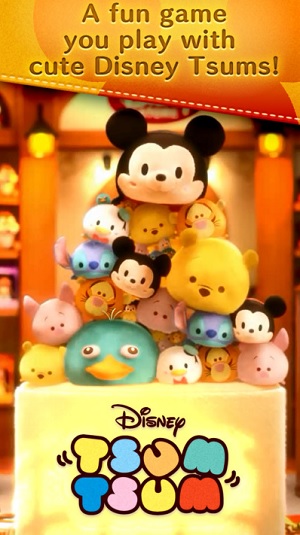 Dino Hunter: Deadly Shores was not a particularly creative title, as it was a reskin of Glu’s popular Deer Hunter game, set in a prehistoric setting.

Disney, on the other hand, did well with a game that my 11-year-old helped drive to the top. Line’s Disney Tsum Tsum rose to prominence because the title continued to do well in Japan, where it started, and then made its way to the U.S. market. Disney introduced more than 30 Tsum Tsum plush toys through its gigantic retail and e-commerce channels, as well as its theme parks.

Another big title in the month was DeNA’s Transformers: Age of Extinction, a mobile game that was timed to the opening weekend of the blockbuster movie on June 27. Outside the U.S., the mobile game scored high in Mexico, Thailand, and some other markets. The title joined other successful past movie-based mobile games, such as Despicable Me: Minion Rush, Frozen Free Fall, and Maleficent Free Fall.

One of the viral successes in July was Timberman, a game by Polish indie studio Digital Melody, which debuted the title in May. The game ended in the top five iOS downloads for July, and it briefly displaced Kim Kardashian: Hollywood at No. 1 in daily download ranks.