Mixpanel might have started with tools for the desktop Web, but co-founder and chief executive Suhail Doshi is fully setting his sights on mobile now.

Mixpanel, which builds analytics tools, is pushing out yet another product for mobile today, A/B testing for apps.

As we shift more and more to mobile (some companies are even releasing multiple separate apps), it’s becoming apparent that user experience on the small screen is under scrutiny and companies can’t slack on that front. A/B testing, along with other testing and analytics, are becoming crucial to mobile developers.

“A/B testing is valuable as it helps you identify what customers actually like … [and] prove or disprove theories in the world,” Doshi told me.

When Mixpanel got started, it focused on website analytics, eventually building products for mobile apps and websites as well. Its new mobile app product will enable users to easily create, roll out, and analyze A/B tests. And unlike many of its competitors, this requires no coding — non-developers everywhere, rejoice. Making it accessible to non-coding folks means that if a product manager, for example, wants to run a test, he or she doesn’t need to chase down one of the company’s developers to make this happen.

“Most companies that do A/B testing make you write code. It’s important that people in the world make products that nontechnical people can use,” Doshi said. He added that both Leanplum and Optimizely require some coding and that his product’s accessibility is better designed. (Both Leanplum and Optimizely’s websites claim they do not require code in order to make edits or push out tests.)

The interface is an easy drag-and-drop setup that enables users to edit their apps just as they would edit a website or blog with a similar interface. You can edit buttons, colors, images, and more.

And while Mixpanel has designed its tool without requiring any code, it does let developers work their A/B testing magic with code if that’s what they want. Developers can go right into the app’s code and tweak variables for the experiment they want to run.

Once a test is over, users can decide to either go ahead and make changes to their app and resubmit a new version to an app store, or they can deploy the new changes to the rest of the app’s users so they can immediately have the optimal version. The changes, though, must at some point be hard-coded into the app and resubmitted to the app store — Mixpanel’s tool isn’t a mobile app CMS in the true sense.

The new mobile A/B testing tools are in the new Mixpanel, so no additional signups or fees apply.

The A/B testing is part of Mixpanel’s quest to “own as much of the enterprise on mobile” as possible, Doshi told me. 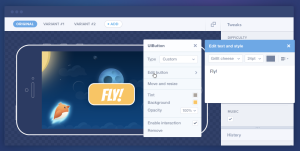 As mentioned earlier, Mixpanel started on the desktop, but it’s been paying more attention to mobile over the last couple of years. Doshi is now making his company “mobile-first.”

“If you look at most B2B companies, they’re desktop-first. If you’re a B2B company, you can pretty much disrupt every company just by building it mobile-first,” he said.

Doshi’s notion is that there are lots of great B2B ideas and services out there, but since everything is shifting to mobile, whoever beats those desktop companies could own the enterprise.

“We are one of very, very few companies that are mobile-first on enterprise. Every product that we’ve built over the last two years is mobile-first”

Whether this plan works out for Doshi and Mixpanel remains to be seen, as plenty of other companies such as Leanplum, Optimizely, and Swrve are also building tools for mobile analytics, testing, and more.