Samsung, the world’s most productive company when it comes to making smartwatches, has just announced a new model: The Gear S, its sixth smartwatch.

The Gear S is quite special. It will sport a 2-inch AMOLED curved glass display, 3G connectivity (independent Internet!), and Samsung’s Tizen operating system, and it will let you make phone calls.

More specifically, the Gear S will have 3G, Wi-Fi, and Bluetooth connectivity to ensure you keep your watch online at all times, even if your phone is too far from it for the Bluetooth connection to work. In addition, you can make or receive phone calls, reply to incoming messages using an onscreen keyboard, and use voice commands to control your watch. The watch will also be equipped with a heart-rate monitor and GPS.

On the features and apps front, the Gear S will come equipped with turn-by-turn pedestrian navigation, news and weather features, a music player and photo gallery, the ability to check social notifications from Facebook, a Nike+ Running application, S Health features, and more.

And if that wasn’t enough, Samsung also announced a pair of headphones, the Gear Circle, that can work with the smartwatch and let you “receive calls, listen to music, and make voice commands in style through a Bluetooth connection,” as Samsung said in a statement.

The company made the announcement at its headquarters in Korea about an hour ago. And while that indicates the watch will likely hit the Korean market first, the company did say that the Gear S and Gear Circle will be available in global markets “in phases … beginning in October”

Earlier this week, LG teased its upcoming G Watch R in a little video, despite its first Android watch being more or less a failure, and today the rumor mill pegged Sept. 9 as the announcement date for Apple’s wearable, the same day it will unveil its new iPhone lineup. 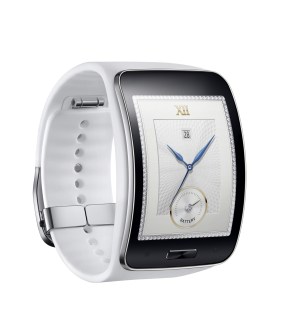 Above: The Gear S will also come in white (above).