The cost of getting a loyal mobile user fell 9 percent in July compared to the previous month, but that’s only a little bit of a breather for mobile app developers and publishers, according to a report by mobile marketing firm Fiksu.

The cost per loyal user, or one that opens an app three times, was $1.97 in July, down 9 percent from $2.23 in June. However, there’s not a lot to celebrate, as the costs were still at the second-highest monthly level in the four-year history of the Fiksu indices. And the July costs were up 9 percent from a year earlier.

The trend is clear. As brands jump into mobile apps and the competition becomes more fierce, app makers are spending more money on advertising to make their apps stand out. But the danger is that many of the apps are free-to-play, where users start playing for free and pay real money for virtual goods. That means that companies have to invest in making an app, and then invest heavily in advertising that app. They can get plenty of downloads that drive up their operating costs. But they only start making money back if a percentage of users — maybe 5 percent — starts buying things in the app.

In other words, app makers, especially game creators, have to spend a lot of money upfront before they see money coming in.

At the same time, Fiksu’s July App Store Competitive Index, which measures aggregate daily download volume among the top 200 ranked iOS apps, increased from June’s 6.1 million to 6.2 million, up 2 percent from June and up 7 percent from last year.

The Cost Per Launch Index, which tracks the costs of driving engagement from mobile users, was up 16 percent year-over-year on iOS and up 13 percent on Android. Fiksu said that increased app usage – potentially from users with more time and inclination to engage with apps during vacations or other downtime – may have helped keep those numbers from increasing even further.

July marked the first month of the full availability of Twitter’s Mobile App Promotion products. Results suggest that Twitter will be a major player for app install ads, Fiksu said.

“The July Fiksu Indexes reflected the typical slowdown of summer behavior but confirmed that underlying app marketing costs are still rising consistently year-over-year,” said Micah Adler, CEO of Fiksu. “However, marketers need to be sharpening their strategies in readiness for the next few months. In addition to powerful new channels like Twitter, a new iPhone and iOS always shake up the app marketing landscape.” 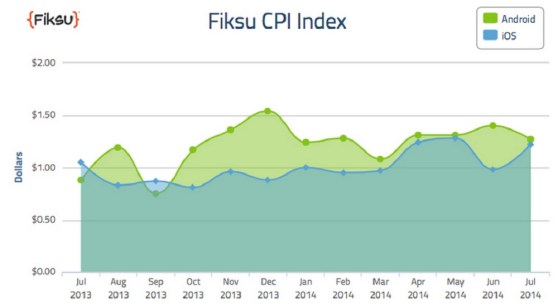 Above: Fiksu cost per install index in July 2014.