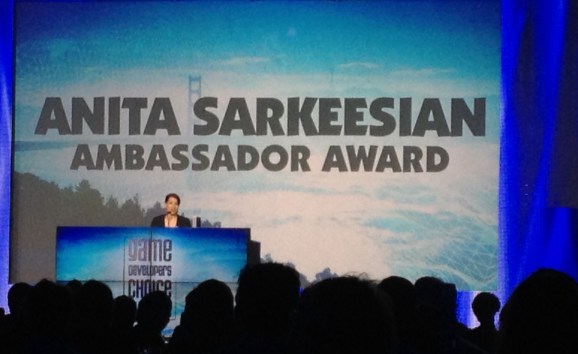 Anita Sarkeesian accepts the Ambassador Award at the 2014 GDCAs

One of the biggest groups for developers in the industry took a stand against the organized online harassment several game makers are facing, calling for “the entire game community to stand together against this abhorrent behavior.”

The International Game Developers Association (IGDA) issued a statement condemning Internet haters for harassing game developers in several widely publicized incidents, including threats directed at critic Anita Sarkeesian that drove her from her home over safety fears. The effort is aimed at turning the tide against those who argue that gamers, or whoever is doing the harassing, are within their free speech rights to threaten game makers.

The association is like many professional groups that struggle with the no-filter environment on the Internet, particularly when it leads to uglier behavior such as physical threats or even death threats — coupled with the publication of the personal addresses of the people being harassed.

The IGDA, which represents thousands of game developers, issued a statement that said, “Over the last several weeks, game developers and affiliates have been the subject of harassment and ‘doxxing’ attacks, including threats and posting of home addresses. While we support diverse viewpoints and healthy debate on the issues within our industry, we condemn personal attacks such as these which are not only morally reprehensible, but also illegal in many countries. We call on the entire game community to stand together against this abhorrent behavior.”

In the past couple of weeks, ugly incidents have happened. Sarkeesian, who created the Feminist Frequency videos about stereotypes of women in games, received threats made on Twitter about her most recent episode. Developers Zoe Quinn (creator of Depression Quest) and Phil Fish (creator of Fez) had their social networking accounts hacked and their private details made public.

Developers at Sony Online Entertainment addressed haters in a humorous manner by creating the video below. SOE’s PlanetSide 2 development team created this video for its annual SOE Live event. The video was created to be tongue-and-cheek, similar to Jimmy Kimmel’s “Celebrities Read Mean Tweets” routine. It was intended to help humanize the development team and make light of the “mean tweets” said to the team.

SOE is the studio that John Smedley leads. He’s the one that was on the plane Sunday that received a bomb threat from a group that also claimed responsibility for bringing down Sony’s PlayStation Network over the weekend.

In a statement to GamesBeat, IGDA executive director Kate Edwards passed along some advice she recommends for developers experiencing harassment: