He’s blue, he stars in a side-scrolling platforming shooter, and he has to take on some master bosses one at a time. He’s not Mega Man, but he’s close.

Developer Inti Creates, which has a long history of making Mega Man Zero action platformers for Game Boy Advance, is back with something original but familiar in Azure Striker Gunvolt. It is a spiritual successor to those classic games, and it’s available tomorrow on the 3DS for $15. Like the classics it takes inspiration from, Gunvolt is all about side-scrolling shooting action and platforming, but it also introduces elements that give this debut franchise a fresh and interesting feel that is all its own.

Gunvolt struck me immediately with its visuals. The 2D characters and environment are look crisp, and the hero character especially has an appealing design. Everything looks like an update on the old 16-bit style.

Additionally, Gunvolt’s weaponry — which includes a customizable gun and an electricity attack — use gorgeous particle effects. 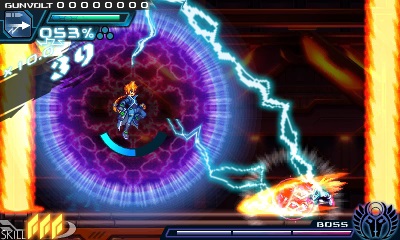 Above: You can attack enemies with the electric charge by tagging them with your gun.

For example, Gunvolt’s projectiles aren’t just laser blasts that shoot through the level until they hit an enemy. Instead, the shots glow blue and stop once they hit a wall and bounce off in a satisfying way. It makes the 2D, cartoon world feel like it exists.

The characters themselves include a ton of detail, and some of the bosses especially pop off the screen.

Going into Gunvolt, you should expect something like Mega Man but with a twist.

Yes, you’re spending most of your time firing a gun at enemies, but that weapon simply isn’t all that powerful. Even when you upgrade the firearm with different types of ammo, you’ll have a tough time taking out even the weakest enemies with the gun. Instead, you need to use your electrical powers.

Every time you hit an enemy with a projectile, you’re actually tagging them. This enables you to automatically target opponents with a powerful electric blast.

The moment-to-moment dance of Gunvolt is all about targeting the enemy without taking a hit so that you can lay down the bright blue static charge for the real damage. It’s an enjoyable loop, but Inti Creates takes it one step further.

Gunvolt isn’t just about clearing a stage. Instead, it’s grading your performance. You need to nail the best combos possible to come out with the highest grade. Combos mean going through a stage without taking damage. You can get bonus points by performing difficult actions like taking out multiple enemies at a time.

As you build up your score, you need to completely avoid damage until you reach a checkpoint where you can cash your combo.

Essentially, this system had me playing the same levels over and over. Not only did I want a higher score, but I wanted to use the extra credits that come along with it to unlock more upgrades for Gunvolt.

It all makes for a gameplay loop that pushes you to keep playing. It also fills a gap that maybe the recently released retro-style platformer Shovel Knight tries to fill.

Feels too easy for too long

Gunvolt’s biggest issue is that it just doesn’t feel all the challenging. You can run through the levels, tag enemies immediately, and kill them before they ever even attack once. Even when you do get to a bigger opponent firing off a wave of missiles, your energy attack protects you from that kind of damage.

Compared to most Mega Man games, Gunvolt feels too easy.

Inti Creates is also working with developer Comcept on Mega Man creator Keiji Inafune’s Mighty No. 9 spiritual-successor franchise. With that coming, with Shovel Knight already out, and now with Gunvolt, independent developers are delivering on an action-platforming genre that traditional publishers have ignored.

I like Shovel Knight better than Gunvolt, but I’m glad both exist.

Gunvolt is proof that an entire genre of 2D action games can still work, and I hope that the trend doesn’t stop with Mighty No. 9.

Inti Creates provided GamesBeat with a reviewable download code of Gunvolt for the purposes of this review. Gunvolt is out Aug. 29 on the 3DS eShop.