Many of the people who are really into Madden or FIFA are sports fans before they are “gamers.” But their money is still green, and they aren’t in short supply. They probably don’t care about Sony or Microsoft while they’re busy rooting for the Green Bay Packers or the Chicago Bears. This presents an opportunity for a company like Microsoft to snatch them up early in the generation.

Getting sports fans on board can have long-term positive effects on a console. Madden or FIFA fans, as with a lot of people, love playing online with friends. If a group of friends starts leaning toward the Xbox One, the system could potentially turn into the “default” for the entire group and the rest of the friends will upgrade to that platform in order to continue in the group.

It’s a phenomenon that most people who play console games experience: having to choose a platform to play with one group of friends or another. That battle is happening across all aspects of gaming, but sports is one area that Microsoft has a chance.

Sports gamers are easy to understand. They are easy to market to. They play a lot of Madden. Well, then give them Madden.

Above: Madden NFL 15 in action.

Microsoft wants fans of Japanese role-playing games to buy its system. That’s a sizable crowd, and that could translate into a lot of money — but ignoring the Xbox’s failures in Japan, it’s difficult to understand what would make fans of RPGs happy. Hell, Square Enix barely understands that crowd and what makes it happy, and that’s the publisher responsible for the Dragon Quest and Final Fantasy games.

“Sports gamers tend to spend a lot of money,” IDC research director Lewis Ward told GamesBeat. “They fall into the hardcore category. That means they’re more likely to spend more, which means it makes a lot of sense for game developers to focus on stuff like soccer, football, and baseball.”

Winning over a type of fan can translate into a ton of cash, but sports fans seems like one of the few easily defined demographics that is worth investing in.

“I don’t think that any specific game is going to turn the tide and put Xbox One in front of PS4 in the next couple months,” Ward said. “It’s gonna take a cumulative approach that includes exclusives and download stuff. I think that Microsoft has performed disproportionately well in the United States, just like Madden. So of course, to keep that momentum, Microsoft is going to focus on Madden.”

Last holiday, after Xbox One and PlayStation 4 launched, EA noted its FIFA 14, Madden NFL 25, and its other releases were selling extremely well on both PS4 and Xbox One. When Sony’s system debuted, one in every three games sold was from EA. Obviously, PlayStation has a lot of people who are into sports. If Microsoft’s strategy is going to work, it’s going to do so from this point forward — starting with Madden.

Sony has already sold 10 million PlayStation 4s to customers. Microsoft, meanwhile, has only shipped more than 6 million Xbox Ones to retailers. And the NFL app, which debuted half-way through the season last year, didn’t make a difference.

But Madden is out this week. The bundle for that game debuts alongside it. EA Access is only a few weeks old. And millions of Xbox One owners now have the NFL app to kick off the season. Perhaps these features can give the Xbox One enough gravity to trap people who primarily play sports sims in its orbit.

“It’s pretty clear to all industry observers that Sony is way ahead of Microsoft in terms of who is winning this next-gen console cycle, so I think Microsoft will try just about any type of promo and deals at this point — especially with the tier-1 publishers like EA,” said Krejcik. “Will this work? I don’t think Microsoft will suddenly bridge the sales gap with PS4, but it certainly can’t hurt and in a period of limited new title releases this move makes sense to me.” 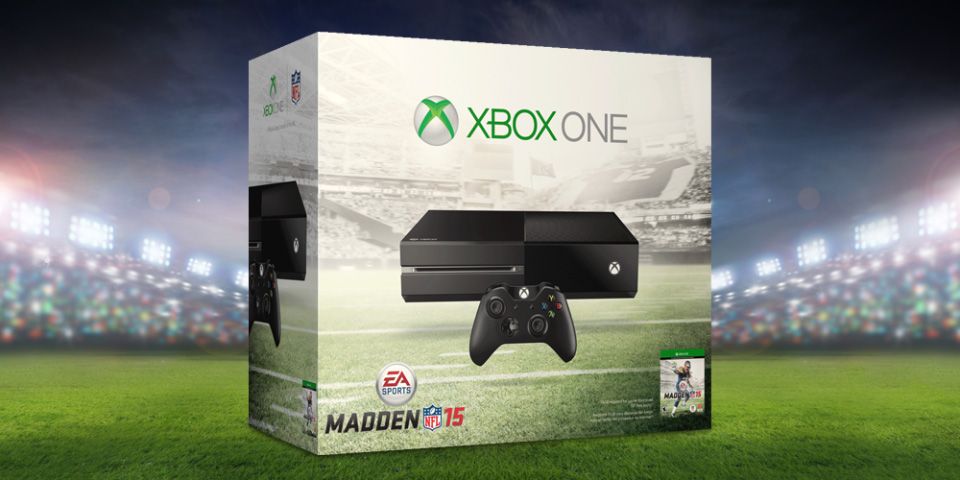 Above: Xbox One’s Madden 15 bundle is out now.

Analyst Doug Creutz with Cowen & Company doesn’t really view it like that. He points out that Microsoft and Sony have done bundles for years. He also thinks the EA Access and NFL apps aren’t necessarily part of a wider strategy surrounding sports.

“EA Access [isn’t on PlayStation 4 because] Sony didn’t want to offer it as they are going to have their own game-streaming service [called PlayStation Now], and Sony wants publishers to buy into that,” said Creutz. “And the NFL app is about marketing the Xbox One as a general-entertainment device.”

Ward falls somewhere in the middle.

“Microsoft is searching around for ways to get back gamers that are either on the fence or maybe have already switched over to the PS4,” he told GamesBeat. “But I also think there are more factors going into it than just that. It was probably something that was long planned regardless of how well the Xbox One sold.”

Creutz is right to point out Microsoft, Sony, and Nintendo have long had bundles as ways to make their consoles more exciting to certain types of people. But an Xbox One that’s selling better would still include a Kinect camera at $500, and Microsoft wouldn’t pack in the game at no additional charge. The Madden and FIFA bundles cost $400. If the box was selling better, that bundle could’ve easily hit retail at $460 or even $560 with the Kinect.