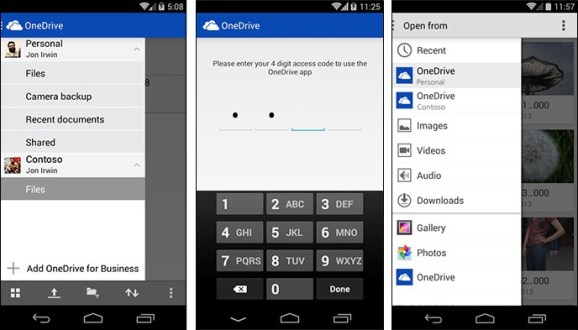 So what if Microsoft isn’t the company behind the Android operating system? Millions of people own Android phones and tablets, and Microsoft wants to provide the one app for creating, storing, and sharing files, whether they be for personal or business purposes.

To that end, Microsoft refreshed its OneDrive app for Android today in such a way that, for the first time, OneDrive for Business files can live in it comfortably next to — albeit separate from — personal documents.

VentureBeat is studying mobile app analytics.
Fill out our survey, and you’ll get access to all the data.

That change should help people who collaborate with others inside a company but also need to keep documents available for their own reference. The move is also important for Microsoft, which needs to keep up with competitors like Dropbox and Google that have been thinking about pairing yet dividing personal and business materials for multiple people to collaborate on.

“For end users, it makes so much sense for them to just do that,” Michal Gideoni, director of product management for Microsoft Office, said in an interview with VentureBeat. “They don’t need to go to two different apps in two different locations across work and life.”

The step also represents an incremental move toward simplicity that Microsoft chief executive Satya Nadella has talked about in recent months. In his memo last month announcing big changes at Microsoft, he wrote:

We will build the solutions that address the productivity needs of groups and entire organizations as well as individuals by putting them at the center of their computing experiences.

And the experience of collaborating on documents in Microsoft world could get better. Microsoft could bring its recently teased Delve feature for Office 365 to OneDrive on Android and other mobile operating systems. Delve surfaces documents to which you’ve been granted access and should be interested in based on your activity in other Microsoft apps, like Yammer.

“[Delve is] mapping content, people, and activities onto a graph and then, based on machine learning, we can actually make decisions about or make actionable things for the users based on what we know in the Office Graph,” Gideoni said.

Such capability could lead companies to get input from more employees on important projects and fuel Microsoft’s whole notion of productivity even more.

Microsoft has not shipped Delve yet, Gideoni said. But with OneDrive for Business now available on Android, Microsoft is paving the way.