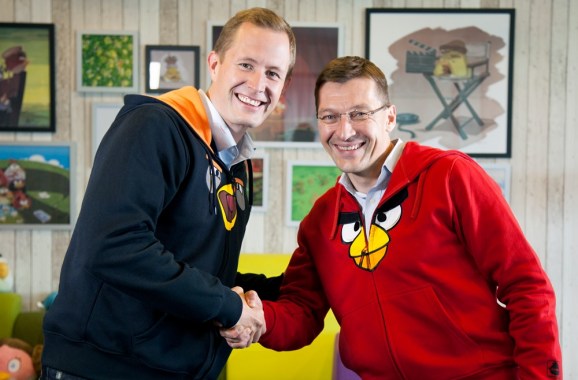 Mikael Hed has passed the hoodie.

The chief executive of Rovio Entertainment, the maker of the iconic mobile game Angry Birds, will turn over the top job at the company in 2015 to Pekka Rantala.

Hed has run the Espoo, Finland-based company for the past five years, helping to turn Angry Birds into a global phenomenon. The CEO changeover happens Jan. 1, 2015.

Pekka Rantala, who was previously chief executive of Hartwall, has more than 20 years of international leadership experience within branded consumer products in various industries. He was previously managing director at Fazer, and he served 14 years at Nokia in various executive roles.

Rovio chairman Kaj Hed, (who is the father of Mikael) has nominated Mikael Hed for a board seat. In addition, Mikael Hed has also been appointed as chairman of Rovio Animation Studios, where he will oversee animation and movies.

“It has been an amazing ride and in the coming months I will be very happy to pass the hoodie to Pekka Rantala, who will take Rovio to the next level,” Mikael Hed said. “Pekka is known to be a great leader with experience building successful global consumer brands. I will continue to play an active role and will support Pekka in any way I can to ensure Rovio’s continued success.”