The studio revealed Saints Row: Gat Out of Hell today during its panel at the annual Penny Arcade Expo event in Seattle. The demon-themed downloadable release is due out in 2015 for $20. While the developer is calling this an expansion, it won’t require Saints Row IV for anyone to play it.

Volition confirmed that Gat Out of Hell will feature The Devil, a talking weapon, and a full-length musical sequence. It will also include weapons based on the seven deadly sins. Sloth, for example, is a mobile recliner with two chainguns attached to it.

The company previously teased the expansion game by sending out packages to press that contained witchcraft-related items and by posting an image of a Ouija board with the Saints Row’s iconic fleur-de-lis. 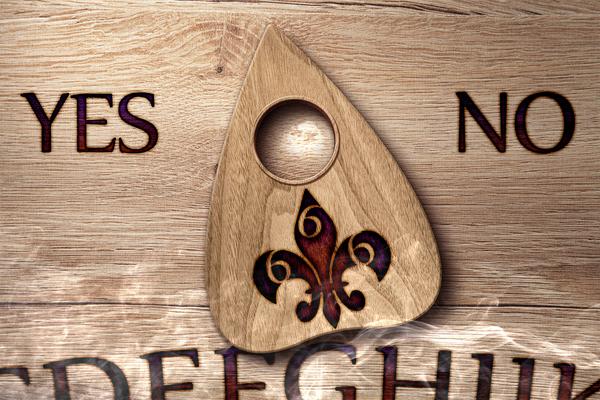 Above: We think the spirits are trying to tell us yes.

Volition most recently released Saints Row: IV for Xbox 360, PlayStation 3, and PC. That action game took the traditional Grand Theft Auto car-driving formula of the previous Saints Row games and shook it up by giving the player superpowers. Now, instead of hopping in a sedan to get from point to point, players could jump over buildings and glide in mid-air.

Saints Row is one of Volition publisher Deep Silver’s biggest franchises. Volition, which was previously a subsidiary of now-defunct publisher THQ, began the series as something of a knockoff of the megapopular GTA games, but Saints Row has carved out its own identity with recent releases.

Saints Row: The Third took a turn into the absurd by focusing on humor and characters. The fourth game, which was originally intended to debut as downloadable content for The Third, amplified the absurdity.