It had to be rats.

The filthy creatures have been a staple of bargin-bin role-playing game foes for decades. These are the first enemies you usually meet — well, rats or boars. But these rats were bigger. They were badder.

And they were a race. It would be the first of many times that Decromancer surprised me. This mobile card-collecting game with a sense of humor comes from Unit9, a tiny startup in the U.K., dumps many of the conventions found in Magic: The Gathering or Hearthstone, offering a more tactical take. But it also has a story, something you don’t find in most card games.

And for several weeks, Decromancer caused me to stuff back my PlayStation Vita and Nintendo 3DS into my bag and play it on my iPhone. Here’s how this small team made a free-to-play game that captivated me.

Decromancer is a bit different from other collectible card games on the market for mobile and PC.

It has a map, something games like Hearthstone, Magic, and SolForge lack. Your army travels to different locations, fighting monsters and other armies, visiting towns to enlist in quests and buy more units, and hitting other points of interest to find items like oysters.

Combat has you facing off against your foe over five lanes, with two ranks. And the cards fight, melee from the first rank and with powers, polearms, or missile weapons in the second rank. You can level up your forces as you gain gold and experience, and you can also purchase more cards to bolster your forces. And as the de facto general, you can cast spells in combat as well (which you can purchase with gold or premium currency).

How you approach combat matters. You can put powerful units with reach (like a polearm) behind a shield wall, which absorbs the blows from the enemy in front of it, sparing your soldier with the polearm from damage as he dishes out the hurt to an attacker. Healers put in just the right space in the second rank can cancel out the damage your forces take. Even a well-timed spell can make the difference.

It also has artwork greater than what one might expect from a mobile card game.

Where it came from

Unit9 not only makes games but is a work-for-hire studio. Well on two years ago, David Rzepa and his colleagues wanted to make a game of their own, not something on contract.

“It started when I took a two- or three-week holiday off work and start this idea I had for a card game. I spent all of those three weeks huddled at home, working solidly on that, and I came back to work with a prototype and showed a lot of people,” Rzepa said. “They said, ‘Oh, this looks quite interesting.’”

But the timing was altogether good. It took a couple of months before his colleagues had the time to work on Decromancer. As the team wrapped up contracts on as Rzepa terms as “the games that brands think people want to play,” it would plug away at this card battler. And when they realized they needed something new to actually release, they looked at Decromancer.

“We’d gotten this great illustrator on board, who’s really amazing at doing character art. It all just fell into place, “Rzepa said. “We spent about a year working on it, almost full-time. A very small team. Most of the time it was just me as the programmer. Finally, toward the last few months, we had a couple more programmers. We had probably four or five different UI designers, because it was one of those things where people had some time to work on it, and then projects would come up and they’d have to disappear, so we’d have to get another designer. It’s a bit crazy and a bit frustrating like that, but we finally managed to release it.”

A free game with in-app purchases, Decromancer hit Nov. 6 for Android and iOS, and it’s gathering votes under the Steam platform’s “Greelight” program to appear on the most important PC digital store in gaming. 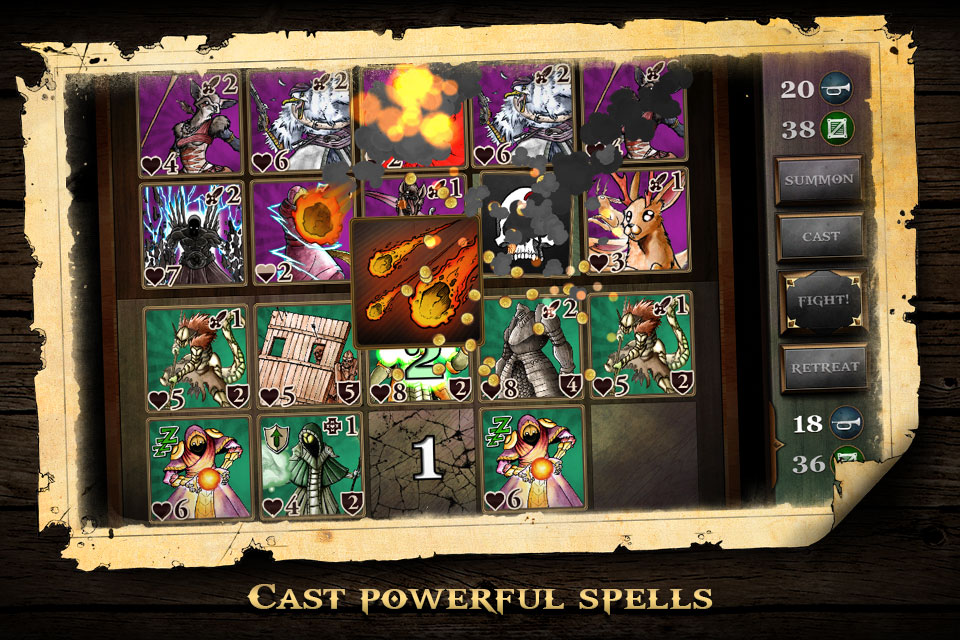 Digital card games are popular. Hearthstone: Heroes of Warcraft could make a hundred million dollars or more for Blizzard. Magic: The Gathering has finally brought deck construction to its digital series. Might and Magic, SolForge, and Ascension also have dedicated players.

Decromancer is different from all of these. You can buy in-game gold and resources, but I found it easy to grind throught without them, especially so since I enjoyed testing out different lineups of troops and leveling them up. You don’t buy card packs, just individual cards. And it really feels like a card-based take a strategy role-playing game.

“It’s strange, actually, because card games are something that I’ve never gotten into. I’ve always liked the idea of card game mechanics, but I think the main thing that bugged me was always the randomness of the decks and the randomness of building a deck. You never had much say in how to create your army. For me, that’s the main difference in Decromancer.

And, Rzepa claims, Magic and Hearthstone only get like that after you’ve spent time gaining card packs — either grinding in-game gold or opening your wallet — to improve your forces.

And while it does have timers for when battles reappear on the map once you defeat them, Decromancer isn’t unlike most mobile games in that you can’t pay to avoid these cooldowns. You must simply wait. It’s an unusual business choice in the sector where some games feel like they try to make money off every player action.

“It’s a strange one, actually. I think it’s mainly because of pacing. We don’t want to force you to grind constantly. We could have added that, but when we were designing this game, we tried not to go crazy on the monetization and pull out every free-to-play trick in the book,” Rzepa said. “We just wanted to make something that was fun, and by extension, the more people enjoy it, the more people will — after they’ve been playing for a long time, it seems as if people will almost want to give us money out of goodwill, rather than because they feel that the game is forcing them to.”