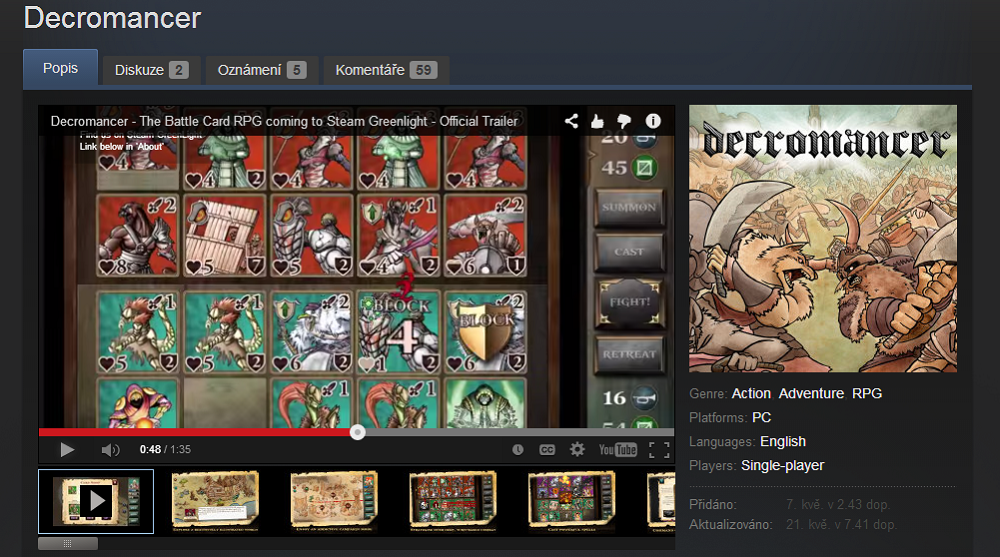 Above: Decromancer on Steam Greenlight.

With such a small team, I thought Unit9 would have an easier time making a PC game than a mobile game so it wouldn’t need to worry about making things work with a touchscreen. For this studio, mobile was the right path. It’s what they knew.

“Since I’ve been here we’ve always just done mobile games. That’s what we’re used to, that kind of flow. We didn’t think it’s that much harder. The way we see it is that if we had designed for PC first, it would have been difficult to then make it work on mobile, because it took us a lot of design time to figure out what battle board would actually fit on mobile screens, let alone iPad,” Rzepa said. “Getting it on an iPhone 4 was quite tricky, making sure that the size of the cards was big enough that you could read the numbers and see the portrait. We didn’t want to just have a single word, because that’s been done before. We wanted to double up and make it so you had some real choices in the formation you picked. That was a real challenge.

I think it’s just because we know mobile better than we know PC.”

Turns out, for Unit9, it was easier to get Decromancer out to the app stores than on a PC digital platform, even if it’s designed in Unity, a game engine that makes it easy to adapt apps to multiple operating systems. It hadn’t worked with Steam before, and it can be difficult for a game from a small studio to gain attention if it doesn’t appear on Valve’s store.

But Rzepa and his team wasn’t sure where to start.

“We haven’t released any PC games before. We don’t have any real contacts with Steam. Nowadays it’s all about Greenlight, and we started a Greenlight campaign, but it’s turning out to be really difficult. It’s harder than we thought to get the visibility on that,” he said.

Other options exist: GOG.com (which sells new games along with classics), GamersGate, or Desura, which specializes in indies. But Rzepa feels Steam is the “ultimate” place for PC games.

An unorthodox path to success?

Between Android and iOS, Unit9 has seen about 19,000 downloads for Decromancer. “It’s really low, actually, compared to the really popular games in the store,” Rzepa said. “With Android, it seems to be steadily growing, the daily installs. With iOS it hit a peak just after we launched, and then very quickly tailed off. I think that’s just the nature of the Apple Store. The visibility problem is even worse than on Android. I think that’s partially because there are just so many games on the Apple Store, and so many good games, whereas on Android people seem to think that there’s not many great RPGs there, for some reason.”

He also points out that piracy has been an issue on Android, “even just to get around the in-app purchases.”

So, can this “goodwill” model translate into success? It’s at least turned into appreciation from people who have played it — so if Unit9’s coffers aren’t overflowing from Decromancer, at least they know that some of the people who have found the card game dig it.

“We get a lot of comments in reviews saying things like, ‘This is the best RPG on Android!’ You would never get that on iOS,” Rzepa said. “Because there are loads of really good RPGs, much bigger-budget productions.”