Giving players the ability to write on your game world feels like an invitation for disaster.

But a system of in-game player-to-player messages – like what we see in From Software’s challenging action-adventure Dark Souls II – can foster a great sense of community and support. But how much freedom do you give a player base that could just as easily troll or mock their fellow players than offer help? I recently spoke with Yui Tanimura, game director on Dark Souls II, about what has come from their effectively giving players both a vast white wall and the spray paint with which to leave their mark on it.

Above: Players eager to duel other players must leave specific sign in order to be summoned for combat.

From Software has allowed players to leave messages for each other since Demon’s Souls back in 2009. While the process of allowing players to post messages has seen its tweaks along the way (Dark Souls II allows for instant message creation from a menu, for example), the goal behind it has remained the same over the years. In fact it was the idea of a loose message system that became the gameplay foundation of Demon’s Souls.

“Not all users are looking for close relationships with one another,” Tanimura said. “Myself and the staff at From Software thought that it would be novel to have an online game that allows for more lax communication that players can enjoy at their own pace. That idea was the starting point for Demon’s Souls. Although there have been changes in the game overall, the approach has not changed.”

But giving players complete freedom in posting messages has its drawbacks. The risk of your atmospheric adventure turning into a forum for inappropriate language is ever-present in an industry plagued with foul-mouthed multiplayer sessions. Especially considering that From Software does not regulate or erase any messages left by players. Tanimura mentions the developers attempt to avoid letting users write “offensive messages,” but the decision to limit players with set phrases (e.g. “watch out for ___” or “___ here”) was more of a pragmatic one.

Above: This will be the most common message you’ll see in Dark Souls II.

“This was a cost decision from an operations standpoint,” said Tanimura. “We decided that, to make it possible for not only users speaking the same language, but also users of different languages to communicate with one another, it was best to use a set phrase system. When selecting phrases to include in the system, we emphasized providing players with phrases that they could use creatively in the most possible situations. Because that mindset at the time of production, we believe the message system in Dark Souls II allows for creativity and ingenuity.”

This mindset has proven immensely successful. Playing through Dark Souls II online today lets player find notes revealing nearly every hidden door and warnings of almost every enemy waiting just around the corner. Players have the ability to rate up every single message they come across, a single “Rate” option acting similarly to a “like” on Facebook. The more popular messages are “…more likely to stick around longer than lower rated ones.”

But what are the most popular messages across Dark Souls II? Is there enough of a sadistic subset of players making the game even more difficult by rating deceiving notes? Or do the more kind, helpful memos stay around the longest? Luckily for most of us, Tanimura says that it’s the latter.

“The majority are helpful messages or messages reflecting on the game,” Tanimura said. “The overall trend is for users to be helpful to one another and to share their thoughts and reflections about the game. Only a handful of messages are left to make other players slip-up.” 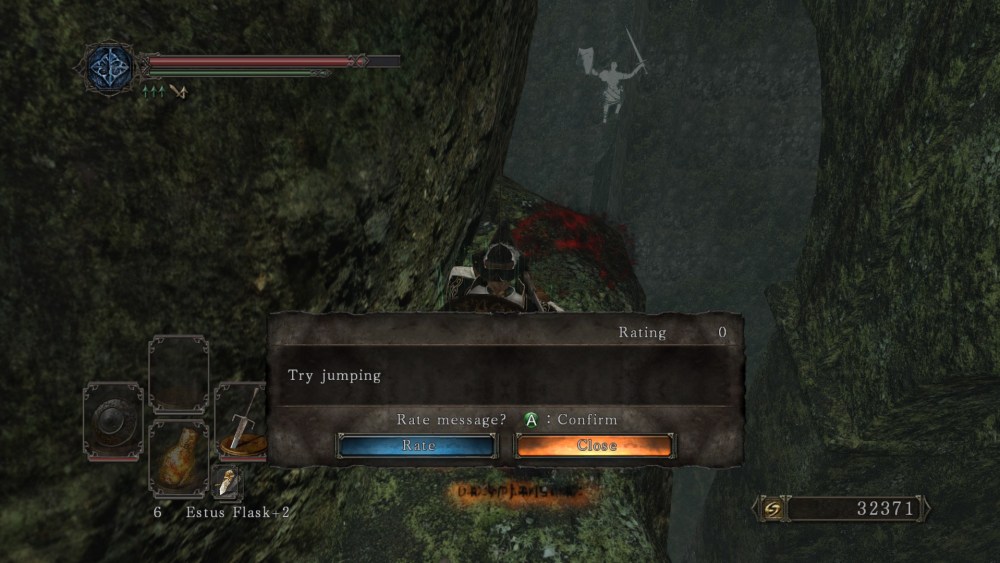 Above: Sometimes it’s best to not blindly trust every message you come across.

Even with a restricted vocabulary, gamers have managed to surprise Tanimura and the folks at From Software with their creativity. Some of the time, the surprise comes from a bit of dry wit in the midst of a very bleak game.

“I once laughed at a message near the corpse of a user who had suffered a painful death,” said Tanimura. “The message read ‘Friend,’ and was ranked very highly. There are many messages I look at and think it’s wonderful that these users are able to come up with such interesting uses for these phrases.”

Letting players write on your game world, even when limited to a list of pre-approved phrases, is a gesture of immense trust. In the case of Yui Tanimura and the staff at From Software, a community of innately helpful adventurers grew out of that trust, eager to offer a hint to their fellow wanderers. But I still wouldn’t trust any message that tells you to jump off a cliff. No matter how highly it’s rated.