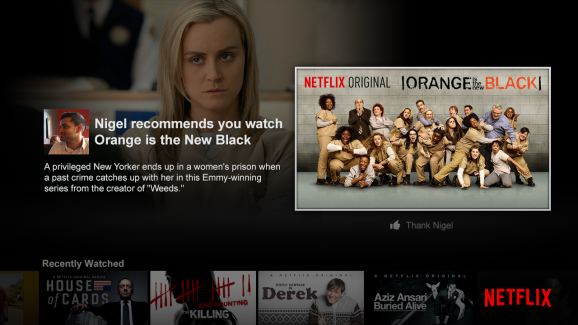 Allowing my friends to see everything I’ve recently viewed on Netflix might prove embarrassing, (as sadly most people would just never appreciate the number of cartoons I watch). And until now, that was pretty much the only integration offered between Netflix and Facebook.

Today, however, Netflix pushed out a new integration for Facebook aimed at making it easier for you to make recommendations for TV shows and movies to friends. The new integration happens after a video ends, which makes sense, since that’s usually when I would pass judgement on the film I just watched.

If you do decided to share a movie, you’ll see a row of friend’s photos to choose from and have the option of attaching a short message as well. Also, the friends you’ve made a recommendation to won’t see it until they log back into Netflix. Hopefully this will help cure the “what to watch” bug that myself (and probably many others) get during long bouts of boredom on a lazy weekend afternoon. But don’t worry, the recommendations you make won’t be shared publicly via your Facebook profile.

The new Netflix integration works best if everyone has already connected their accounts to Facebook. But anyone who hasn’t done so will still get the recommendation in the form of a private message that’s accessible via Facebook’s reviled standalone messenger app. (I haven’t played with the integration yet, so I don’t know whether you can also see those messages from the regular desktop website as well.)

Check out the demo video below for a closer look at the new Netflix/Facebook integration.