Netgear is targeting hardcore gamers with its latest Nighthawk X4 Wi-Fi router. The router is packed with technology, including a 1.4-gigahertz dual-core processor that enables it to reach a network speed of 2.33 gigabits per second. That means that you won’t lose a Call of Duty multiplayer match because your router is too slow.

Netgear says gamers will be able to enjoy wired-like Internet connectivity on their wireless devices. San Jose, Calif.-based Netgear is adding the latest Nighthawk X4 AC2350 Smart WiFi Router to its line-up that includes a more expensive X6 version for families. While the X6 is designed for lots of family users to enjoy the Internet at the same time, the Nighthawk X4 is aimed at gamers who need the fastest possible Internet speeds for games.

The Nighthawk X4 supports four streams at the same time. It can handle a combined network speed of 2.33 gigabits per second, broken down into 1.733 gigabits a second on the 5 GHz wireless spectrum band and an additional 600 megabits a second on the 2.4 GHz wireless band. The Qualcomm Internet Processor has multitasking features, and the X4 uses the Quantenna 802.11ac Wave 2 wireless chip for faster wireless performance.

“The X4 is all about faster speed,” said Sandeep Harpalani, Netgear’s director of product marketing for retail network products, in an interview with GamesBeat. “It is a next-generation device, and it ensures that your Wi-Fi network will keep up with the demands you put on it. We are targeting the die-hard gamer.”

With four streams, the router can deliver high-quality high-definition video with greater clarity and fewer delays due to buffering. It has four high-performance antennae, and dynamic QoS prioritization. That means that it intelligently handles Internet stream loads, Harpalani said.

Instead of treating all devices and applications the same, the router recognizes each individual application, such as gaming, streaming, file transfers, or web browsing. It prioritizes them in a smart way, allocating enough capacity for a YouTube stream without interrupting a separate Netflix stream if two different users in a household are viewing separate streams at the same time.

If a fast-action game is being played, the Nighthawk X4 will prioritize that traffic.

It also prioritizes traffic based on a device type. If you are watching video on a 65-inch TV, the router will make sure that the bits flow to the TV without annoying interruptions. But if you are watching on a smaller tablet, the router adjusts the quality level accordingly. That ensures that you won’t see jitter in video or lag in online games.

The Nighthawk X4 also offers features for easier sharing, storing and securing your files, and multimedia content. You can easily add storage by connecting a drive to the twin SuperSpeed USB 3.0 ports or one eSATA port on the Nighthawk X4, giving you fast access to all your files. The device has five Gigabit Ethernet ports. It costs $280, and it is available for preorder now. It will ship from e-commerce sites within a week, and it will also be available at retail stores in September. Netgear will show off the router at the IFA trade show in Berlin. 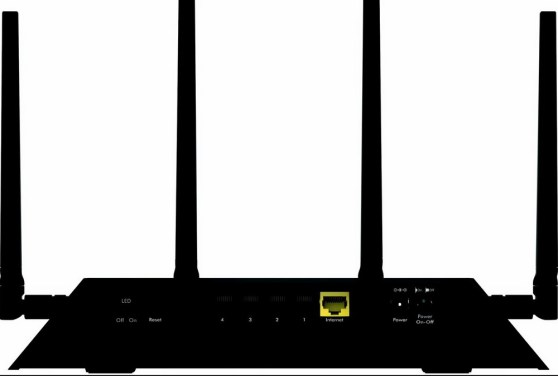