I’m sitting in bed, fighting off sleep to finish celebrating and mingling at my birthday party with Kim in the Kim Kardashian: Hollywood game. I can’t quite get there. I need more energy to reach 5 stars, and I need more Twitter followers to become an A-list celebrity (for research purposes only, of course). The offer to pay is there, and I know it will get me to that level of fame I desire in the game, but I’m resistant. I reluctantly give in and spend $5 to finish the party with 5 stars. Why did I initially feel guilty for spending money in the game? I didn’t have to pay to download the game, and I’m having a lot of fun playing it.

Free-to-play games dominate the U.S. Google Play and App Store top-grossing charts. Upward of 85 percent of all revenue from these stores are from free-to-play games. These numbers are high, and they’re getting bigger each day. But we’re not even close to the potential revenue these apps can achieve in the West, so much so that I contend that within 10 years, the West will surpass Japan and Korea in game monetization.

Now those of you close to the numbers in Asia are likely going to call me crazy.

The average revenue per download (ARPD) is an important barometer for developers to analyze the performance and monetization of their apps. According to a February report from mobile analytics firm Distimo, one download on average is worth $5.32 in Japan while in the United States, the ARPD is $2.25. So how can Western games even reach Japanese level ARPD numbers let alone surpass them?

The answer lies with Generation Z. Most children born within the last 10 years won’t know what it’s like to draw on a chalkboard or play with a deck of cards. Instead most kids will be raised on smartphones and tablets. With the iPhone recently celebrating its 6th birthday, children ages 10 and under have now been surrounded by iPhones and apps for more than half of their lifetimes. My 18-month-old twins choose my turned-off iPhone over their favorite stuffed animals every day of the week.

The West has a stigma about paying within free-to-play games that doesn’t exist in Japan and Korea. I never start playing a game on my phone and think “I can’t wait to get to the monetization” or “I will pay to see what’s next”. In countries like Japan and Korea, spending a little money in the game is a normal cultural practice. I’m not there yet, but my kids will be.

So much of everyday life in Asia revolves around the mobile phone, using it to buy a cup of coffee, paying for entrance onto the train, or ordering food. The mobile phone is a single device that acts as a wallet, communication tool, and more; it serves as a lifeline for consumers. In the U.S., we spend more time in cars and pull out plastic to pay for everything.

The American mindset is shifting. It started changing thanks to Zynga’s Farmville. It taught consumers that it’s OK to spend money within a game. Sure, many free-to-play games were available before Farmville, but it was the first to become part of mainstream pop culture. After Farmville was released, it became more common for people to talk publicly about playing that game. A majority of my friends — and especially women — would even tell me how they spent money in the game. Farmville’s entrance into the marketplace was the moment that cultural attitudes toward gaming changed. Paying in free-to-play games was catching on, but no one was admitting how much they were paying. The design of these games were getting people to pay, but not quite to delight them in the moment. It was early days, and the game systems weren’t quite there. But the shift was undeniable. It might take a while to turn the ship completely, but once it gets turning, the perception of games being mainstream will start to favor an Eastern mentality.

The current generation of mobile game players will pay under the right circumstances. Some of them are getting used to the idea of pulling the trigger to pay, but a majority of these consumers still won’t admit publicly if they’ve paid money in a free-to-play game. Why is this? I’ve never met anyone who bragged to me about how much money they spent in Candy Crush Saga. I have however met people who have told me how much money they spent in Clash of Clans. It’s a different type of game and a different type of player, which for some reason makes it more acceptable among the Clash of Clans fan base to pay for free-to-play games.

My kids will not make that distinction. When my kids are old enough to make their own purchases, they won’t think there is a difference between which game genres are “acceptable” to pay for; they won’t think twice about making a decision to spend in a free-to-play game because it will be second-nature for them. They will have grown up with it.

Americans’ behavior with how they interact with mobile games is evolving. Shifting consumer behavior used to take years or decades. The change from one TV per household to three took many years to happen, but the shift from buying CDs to downloading music took just a couple of years. The evolution from flying as a luxury to a commodity took decades, but the idea of paying $3 for a cup of coffee took one visit to Starbucks, and now paying $5 for a cup of Blue Bottle Coffee is my preferred method for ingesting caffeine.

Altering consumer behavior toward technology and interactive entertainment takes less time if it’s all you’ve ever known and it’s quite literally built into your everyday life. If you’ve never lived in a world where you had to be home at 8 p.m. to watch Friends, you wouldn’t find anything strange about watching your favorite TV show whenever you wanted. If you don’t know any difference between a life where you can buy everything with your phone it wouldn’t be so odd to spend $5 in bed to complete a level. You might actually brag about it to your friends the next day, especially if you pass them on the leaderboard.

We’ve drawn a line in the sand in the West for industry standards and metrics like a 5 cent ARPDAU trying to hit 10 cents (or more). We’re hitting retention goals based on current industry standards, and what we should be doing is thinking about drawing a new line. This new goal is going to be drawn so far ahead of the previous line that the current sandbox we’re playing in to determine positive key performance indicators will expand in all directions.

The way we’re designing and thinking about game monetization today is not helping to move the industry forward. We need to rethink everything for the next generation of players, and that next generation will carry us into the new frontier of what’s possible in the free-to-play game market. Currently, the East is where developers try and test everything, but it’s going to shift to the West.

That early crest in the big wave is coming. We have games making a lot of money in the West now. The sophistication of monetization in markets like Japan and Asia is not something that will need to be dumbed down for the West, and we can drive a new standard of complexity. The next generation of mobile game players will lead the way. With the population more than twice the size of Japan and Korea combined, America truly has the size and momentum in the space to be a Sleeping Giant. 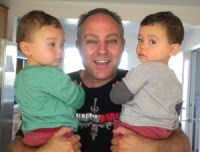 Above: Barry Dorf, with future gamers in hand

Barry Dorf is the vice president of partnerships and alliances for DeNA. He has worked in the games industry for over 18 years. He’s responsible for fostering relationships with licensing partners and external game developers to enhance DeNA’s mobile games portfolio.