Many of Silicon Valley’s most respected companies, from Google to Paypal, were founded by immigrants. In the race to capture the top talent, each state has been slinging various incentives at ambitious and foreign-born students. The Brookings Institute is out with a thorough new study and interactive guide to where foreign students choose to live, study, and spend their money.

Where students come from 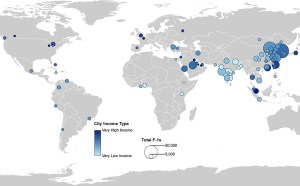 Foreign students with science, technology, engineering, and math (STEM) degree aspirations overwhelmingly come from the Asian powerhouses in India and China. Hyderabad, India, sent 20,000 students with a student (F-1) visa, and Beijing placed a close 2nd at 19,000. But with 426,000 STEM-minded foreign students in total, no one country dominates the talent pool. 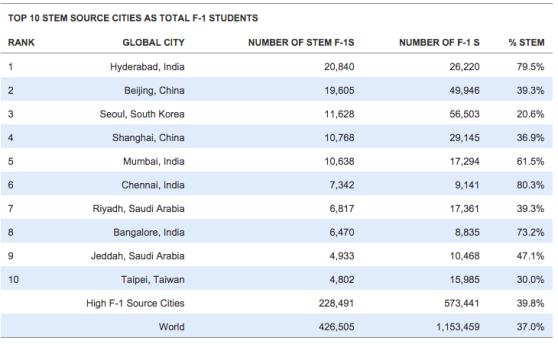 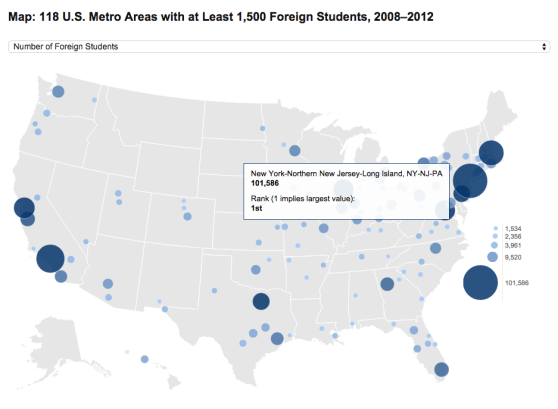 It should be no surprise that foreign students congregate in the largest metro areas: New York ranks #1 with 101,000 F-1 visas. When combined, San Francisco and San Jose combined have about 57,000 students, which outranks Boston’s over 53,000 students.

Interestingly enough, as a percent of total STEM students, Texas and Florida are hot destinations. 80 percent of the Beaumont, Texas, area are tech-minded students. This appears to be connected to generous incentives given by the cities and universities.

Meanwhile, Los Angeles ranks 2nd in students majoring in business and marketing. The report finds that the University of Southern California has both the highest number of total foreign students of any school and has a unique international business MBA. USC students actually do consulting for foreign companies, with large companies paying $22,000 for this consulting service and associated travel expenses.

It appears that many foreign students have a plan to make money before they immigrate.

If it wasn’t already clear, foreigners add to the US economy. Over the last decade, the share of upper middle income and upper income students have soared. These relatively well-off students “contributed approximately $21.8 billion in tuition and $12.8 billion in other spending — representing a major services export — to those metropolitan economies over the five-year period,” according to Brookings. “The New York metro area ranked first for total tuition ($2.6 billion) and living expenses ($1.6 billion) received from its 102,000 foreign students.”

Ithaca, New York, gets the biggest chunk of change for each students, at $58,000 for tuition and living expenses.

Unfortunately, Congress won’t be moving on any major immigration reform this year. So any policies to encourage more high-spending STEM students will have to wait until at least next year, if not longer.

The report itself has more for information that we can present in this post. You can play with the interactive graphs at the Brookings website here.