Google has apparently won the Internet, so why not web-based digital analytics products too?

TrustRadius’ latest user-powered report is on digital analytics, and the freely available Google Analytics package seems to be the favorite. That’s not just in small businesses with fewer than 50 employees. That’s also in mid-size companies with hundreds of personnel. And in the enterprise category, the data says that the free Google Analytics is still the most-preferred solution, beating out even Google’s supposedly premium paid product.

According to TrustRadius VP Bertrand Hazard, it’s not just because the price is right.

“We rank software on adoption and user ratings,” he told VentureBeat via email. “Free tools are obviously widely adopted, but we also see high levels of satisfaction as Google Analytics free (and Piwik) are strong tools … [B]uyers are to some degree making a choice between paid and free solutions, so we think it’s right to compare them. We think it’s a fallacy for traditional analysts to leave out open source and free solutions.”

Of course, he did add that when — or if — there are problems with a free service, people don’t complain as much as they would for a paid tool … which probably does have some impact on the ratings.

The leaders in small business, as defined by 230 “in-depth” product reviews by TrustRadius users, include StatCounter and Piwik, along with Google. 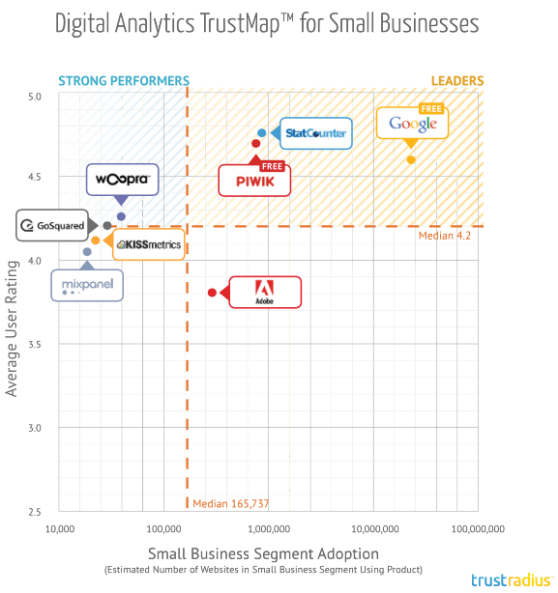 For mid-size businesses with up to 500 employees, only Adobe joined Google in the leader category, but GoSquared, KISSmetrics, and AT Internet were all rated as “strong performers.” 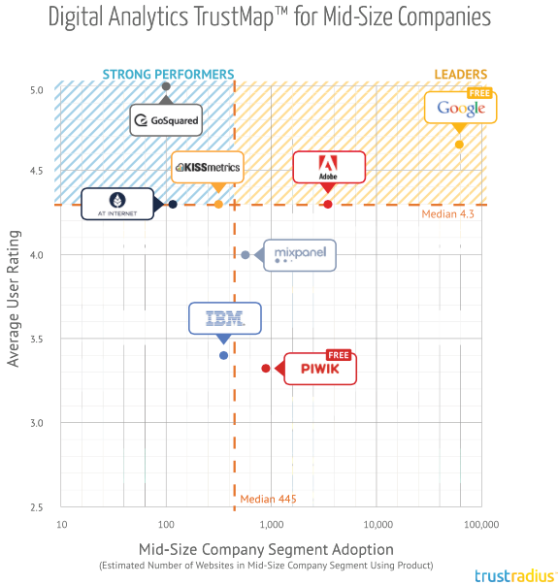 And for enterprise, Adobe, Google Premium, comScore, AT Internet, and Piwik joined Google’s free offering as either leaders or strong performers: 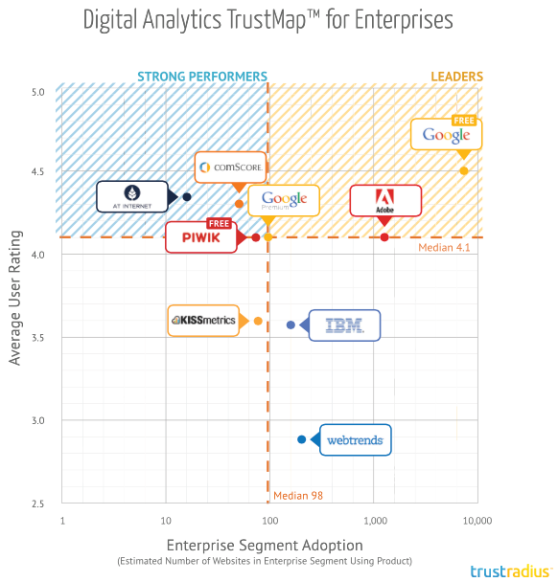 Digital analytics tools measure activity on websites, social media properties, and mobile apps, usually via tagging pages, employing cookies, or tracking users. Google Analytics is the most widely-deployed online, currently tracking actions on 25 million websites, while Flurry is one of the largest mobile analytics companies, with its monitoring code embedded in more than 500,000 mobile apps.

Bringing the three worlds of apps, web, and social together is a major challenge for many companies, and the focus of serious investment for digital analytics tool providers. In fact, it’s one of the reasons Google Analytics recently updated its lexicon from “visitors” to “users” and from “visits” to “sessions,” the report says.

One thing that’s obvious, Hazard told me, is that companies don’t just use one tool: They use multiple tools simultaneously, and for different reasons.

“Google Analytics is great for understanding traffic sources, what’s happening at a macro level on your website,” he told me via email. “KISSmetrics is good for tracking individual behavior for things like retention, cohort analysis, and conversion at a segment or individual level. They are mostly complimentary tools for different ends. Google’s Universal Analytics may change that, but it’s too early to tell.”

The best choice of tool varies by market segment and need, Hazard says, and many of the “strong performers” are either great niche tools or just haven’t seen the level of adoption that Google and others have.

Interestingly, two solutions that scored well in a recent Forrester Wave for Web Analytics did not do well in TrustRadius’ user-focused survey.

Hazard said that “traditional analysts” have failed to keep up with the state of the art in the digital analytics industry, citing a web analytics company’s blog post on the topic, and stressing that this report — and TrustRadius’ ratings — result from user and “expert-driven” perspective, as well as interviews with digital analytics consultants.

Forrester, I’m sure, would beg to differ, identifying “the six most significant software providers in the category” as Adobe, AT Internet, Google, IBM, SAS Institute, and Webtrends.

The TrustRadius report profiles all of those providers, minus SAS Institute, and adds comScore, GoSquared, KISSmetrics, Mixpanel, Piwik, StatCounter, and Woopra.