Another study from MIT found that 95 percent of all taxi trips could be shared, without significantly increasing ride times. Looking at mapping data of taxi rides throughout New York City, the research team ran algorithms to determine how many could pick up other passengers along the way. Both Uber and Lyft have added features that permit consumers to share rides; the study estimates that this ad-hoc carpooling would ultimately reduce trip times by 30 percent while also reducing traffic pollution.

Taken together, these studies represent an existential threat to the taxi industry. The main issue that many taxi drivers have with rideshare companies is that they increase competition. Even if Uber and Lyft were more heavily regulated like taxis, rideshares still reduce the overall wages cab drivers can earn. For example, taxi drivers would make less money if passengers ultimately agreed to share trips.

In addition, wait times are longer with taxis, because they’re aren’t as many cars on the road as Uber or Lyfts. When more cars are allowed on the road, consumer demand will naturally lead to a volume of traffic that is fundamentally different than what cab drivers have enjoyed for so many years.

Interestingly, the Berkeley study of San Francisco riders reveals some tidbits about the demographics and motivations of rideshare consumers.

The study gathered data from “intercept surveys,” where researchers would hang out in traffic hotspots and question respondents as they exited a ride. The distribution of respondents suggest that “uberX [Uber’s lowest-tier service] provided the majority (53 percent), while other Uber services (black car, SUV) represented another 8 percent. Lyft provided 30 percent of trips, Sidecar 7 percent, and the remainder were other services.”

This means that, at least in some San Francisco neighborhoods, Uber is twice the size as Lyft and bigger than all popular services put together.

The study also collected information on why consumers choose rideshares over taxis. Most respondents (35 percent) indicated that they preferred a rideshare over a taxi because of ease of payment. Shorter wait times was the second most popular reason (30 percent) 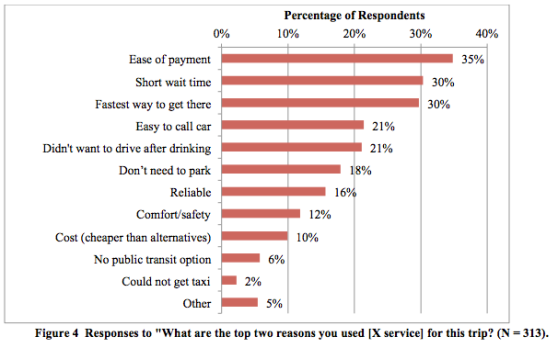 It’s clear that consumers want a transportation experience that is different than the traditional taxi model. It is difficult to see how taxis have a future without dramatic changes.