In a unique deal that brings some cool brands together, Pocket Gems is partnering with Comedy Central to turn the Ugly Americans animated television comedy series into interactive stories. Those stories will appear as tales on Pocket Gems’ Episode mobile storytelling platform, which has become a format that is well-suited for the way that people are consuming mobile entertainment. 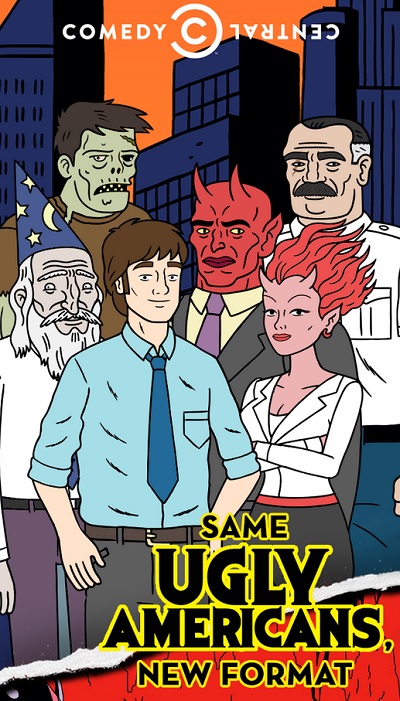 Mobile-game maker Pocket Gems has expanded beyond its usual fare by investing heavily in Episode, which debuted in February. It is so successful that Pocket Gems has been able to attract branded entertainment to the platform.

The Episode project was so important that Daniel Terry, cofounder of San Francisco-based Pocket Gems, gave up his chief executive title so that he could focus most of his attention on the venture.

“This is a passion project for me,” said Terry, who is now chief creative officer. “When we started, it was a risky bet and off-the-wall. But it got immediate traction and it has become an important focus for our company.”

Pocket Gems’ own writers create a lot of the interactive stories, which are like comics where you can turn the page with a swipe of a finger. But it also allows people to create their own works.

More than 700,000 people have signed up as writers/authors for Episode, and they’ve read 250 million chapters so far, Terry said. That’s a pretty good result for such a young platform, and a young company, as Pocket Gems itself is only five years old.

“We have a ton of content being consumed and we have a lot of people creating content as well,” he said.

But with Ugly Americans, Comedy Central’s original writers will create a series of chapters that represent fresh stories in the world of the animated series, which is about zombies, wizards, and social workers. Each chapter is like a short story that you can consume in a time frame that is much shorter than a typical TV show.

“Episode is a really amazing fit for other story-based properties,” Terry said. “It is still growing like crazy.”

The stories, which are part game and part animated comic, change based on readers’ decisions and are available now via the iTunes App Store and Google Play.

The original TV show ran for two seasons, and fans have missed it. Now it will come back on a mobile device.

Ugly Americans features Mark, a well-meaning social worker; Leonard, a wizard with a drinking problem; Callie, Mark’s demonic girlfriend; and Randall, a zombie out to make a quick buck. Fans can control Mark’s actions in the story, such as deciding whether to insult or ignore someone.

“We had such a blast creating this world and these characters for the TV show,” said the show’s creator, Devin Clark. “It has been a real pleasure revisiting them in this new format. Also, maybe now I won’t have to live in a cardboard box on the street.”

“Essentially, Episode enabled us to create a video game and comic book experience where fans can enjoy the Ugly Americans humor and universe in a singular way,” said Dan Yang, executive vice president and general manager of consumer products at Comedy Central.

“This is a really close partnership, and that will continue to be the case,” Terry said.