With the new Lumia 830 and 735, Microsoft doesn’t seem to give a lick about Apple’s iPhone announcement next week.

Announced this morning at the IFA convention in Berlin, the new devices show Microsoft is focused on improving the mid-range of its Lumia smartphone family as well as cementing its presence in European markets that have warmed up to its devices.

When it comes to pure hardware, the Lumia 830 is no match for the Lumia 930, which was announced back in April and still serves as Microsoft’s flagship device. The 830 sports a slower 1.2 gigahertz processor, and while it still packs in Nokia’s excellent PureView camera technology, it only has a 10 megapixel sensor, compared to the 930’s 20MP camera.

If you look past the specs, though, the 5-inch 830 remains a compelling smartphone. It’s Microsoft’s thinnest and lightest Lumia yet, and it will retail for around $433 (€330) when it starts shipping later this month (the 930 costs around $690 off-contract, which is about the same as most high-end smartphones).

The Lumia 830 isn’t exactly affordable for everyone, but it brings Nokia’s PureView camera tech into reach for people who normally wouldn’t splurge for an expensive smartphone.

The new Lumia 730 and 735 are another step down from the 830, and instead of offering a PureView camera they’re more focused on selfies. Both models include a wide-angle 5 megapixel front-facing camera, which should make them ideal for snapping impromptu photos of yourself. The phones will also ship with a new Lumia “Selfie” app, which will also be available for other Lumia devices. 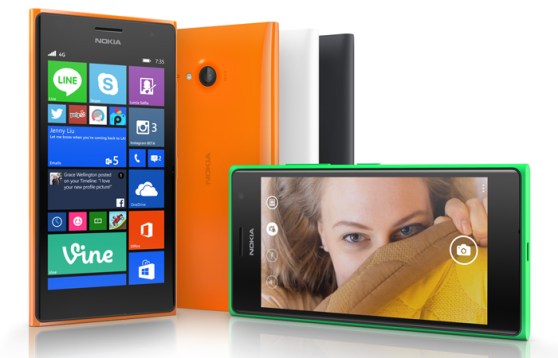