Just in time for football season, Zynga is launching its NFL Showdown game, its first sports title for mobile devices. The title reflects the company’s effort to step up its game quality and move into new genres in pursuit of mobile gamers.

The expansion into football is a very serious effort for a company that made social games like FarmVille, and it is another sign that brands are becoming a strategic weapon in mobile gaming. Much like the recently rebooted Zynga Poker game, NFL Showdown and its larger sports brand are critical to Zynga’s future in gaming.

Sports is one of the new strategic expansion categories for Don Mattrick, the chief executive who came in a year ago with a goal of reversing San Francisco-based Zynga’s revenue declines. Mattrick, who formerly ran the game studios at Electronic Arts, has hired a lot of veteran sports-games developers, including former colleagues at EA, at a new sports game studio in Orlando, Fla.

“This is going to be something new that you haven’t seen before,” said Mike Taramykin, the vice president of Zynga Sports 365, in an interview with GamesBeat. 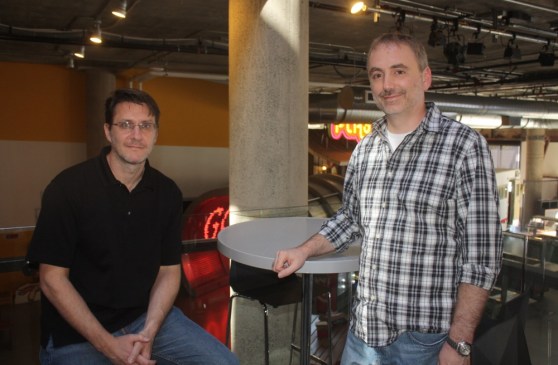 Above: Jay Shenkman and Mike Taramykin of Zynga Sports 365

The free-to-play title isn’t just a copycat of EA’s Madden NFL Football title on consoles. Rather, the Zynga Sports 365 team evaluated football games and decided to do something that was very different and more suitable for mobile platforms. NFL Showdown is a football team-manager game simulation that enables gamers to create their own fantasy teams and play against friends in leagues on a daily basis.

In this game, you don’t toss passes or make decisions one play at a time. Rather, you have to train your football players and use your limited resources to help them have good energy and confidence. The more prepared the players are, the better they will perform in the game, which is reflected in the scoreboard. You don’t see players running around the field in this simulation though you do hear occasional cheering. (That is something you see in the mobile game Backbreaker, which was built by NaturalMotion, a company Zynga bought for $527 million.)

Mobile developer or publisher? Learn how the most successful developers get better users for less money.

You can play games every day or so, depending on how much you want to stay engaged. A game will happen at a fixed point in time, but you don’t have to witness it while it is being played. Rather, you get your players in shape, select your strategy and roster, and then watch the results unfold — or just wait until later to see how the 10-minute game turned out. A full season of games will last about three weeks, or less than a third of the time for a real football season.

This kind of structure will get players coming back on both a short-term and a long-term basis. Players can update their roster, choose a starting lineup, sign free agents, train their team, build game-day tactics, and compete against friends in their quest for a Super Bowl victory. Each group of players has 32 teams, with 32 real human players. For a 21-day season, you square off against those players.

The title is available today on both the Apple App Store and on Google Play. It is the first in a larger sports series, which will carry the brand name Zynga Sports 365. Another title in the works is a golf game based on Tiger Woods’ brand.

If NFL Showdown takes off, it could be important in a bigger sense. Sports titles are something like 4 percent of the revenue of the video game industry, but in mobile, even in the U.S., sports accounts for less than 2 percent of revenue.

“Sports is one of the biggest money generators in the industry,” Taramykin said. “But not enough people are trying out the mobile sports games.”

Zynga has the mobile rights to make games under license from the National Football League and NFL Players Inc. That means Zynga can use the likenesses of pro players in its games whereas other football gamemakers can’t.

That will give it a chance to break into the mobile sports competition with the advantage of having a powerful brand.

NFL Showdown will compete with the fantasy sports leagues of companies like Draft Kings and Fan Duel. While those fantasy-sports companies emphasize daily competitions, Zynga wanted to do something different.

“We aren’t trying to compete with fantasy or replace somebody else’s console game,” said Taramykin. “If I am an NFL fan, I am engaged with that every day or every week. You compete with your favorite players and favorite teams all year round even if there are not football teams playing in July. We have learned that fans don’t turn off their enthusiasm. We are trying to create games for sports fans that transcend the actual seasons.”

The NFL brand is important because football fans love authenticity, said Jay Shenkman, the general manager of NFL Showdown. But Zynga’s own DNA is to create games that are accessible to large numbers of players, not just hardcore fans. Its games are also social at their core. All told, Zynga’s games are played by more than 100 million players monthly. Many of those players are older women, and the sports theme is an effort to get more men as Zynga fans.

“We are excited to work with Zynga on NFL Showdown and give football fans a new way to connect with the NFL teams and players they root for every season,” said Vishal Shah, the NFL vice president of media strategy. “NFL Showdown combines the interactive and social experience that is core to Zynga games with the strategy and competition inherent to football, bringing fans closer to the game they love.”

Zynga has been working on the sports games for a while, even before Mattrick showed up a year ago. Taramykin, for instance, accepted a job offer three days before Mattrick’s hiring had been announced. Before joining Zynga, he spent eight years running the Tiger Woods franchise at EA while Shenkman ran EA’s efforts in sports in mobile and Facebook games.