On my recent Labor Day holiday weekend, my extended family gathered for a vacation on the beach. It was a moment for me to look into the consumer petri dish and think about the state of modern gaming. At any given moment, parents were yelling at their kids to get off their mobile devices. The kids didn’t listen and had their heads buried in their smartphones at every chance. We didn’t have game consoles at the vacation house, and nobody missed them.

My nephews were laughing at my moribund Clash of Clans base. They took pity on me and offered to redesign it so it would withstand attacks better. Meanwhile, I was fascinated with Hearthstone: Heroes of Warcraft, as I finally started playing Blizzard Entertainment’s addictive fantasy card game on an iPad. My kids were playing Let It Goat, the Flappy Bird clone from SkyVu, as well as Swing Copter, the impossibly difficult game from Flappy Bird creator Dong Nguyen.

A year ago, nobody on our vacation was that addicted to mobile games, except for the 9-year-old boy who was always playing Clash of Clans. This year, the parents and kids played a couple of card games and board games, but the kids spent the bulk of their time on mobile gaming. We weren’t spending money, but my college-age kid looked sheepish when I told the relatives about how she spent $20 in iTunes cards on in-app purchases in Kim Kardashian: Hollywood, a game that was the most downloaded title in July and is now the No. 6 in the ranks of the top-grossing games on mobile devices.

Looking at the weekend scene, it was easy for me to grasp the explosion of mobile games and embrace the idea that console games are going to die.

By the end of 2014, mobile gaming is expected to reach $21.1 billion, up 19 percent from $17.7 billion in 2013, according to market researcher SuperData Research.This theme of Total World Domination is what we’re going to be talking about at our GamesBeat 2014 conference on Sept. 15-16 in San Francisco. Console games are currently seeing a resurgence with the sales of the Xbox One and PlayStation 4 consoles. But in the long term, the cycle may be the last one, according to some of the seers of the game business. We may lament the death of consoles, but we’ll continue to celebrate the growth of gaming anytime, anywhere. 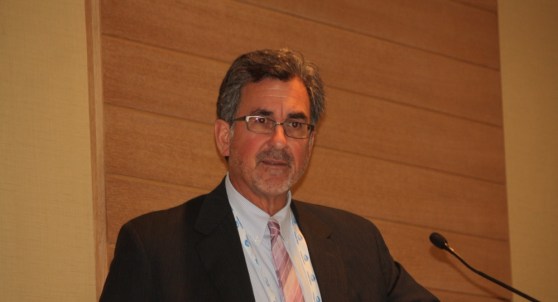 Above: Michael Pachter of Wedbush Securities

“We have a high-class problem with a ton of people playing games,” said Michael Pachter, managing director at Wedbush Securities and a longtime gaming analyst, speaking at the Cloud Gaming USA conference on Thursday in San Francisco. “The Candy Crush Saga player is everybody. It is the best thing that ever happened to gaming, as it converted a ton of old people to believe it was OK to play games.”

The people who dipped their toes into gaming with social games on Facebook and motion-sensing games on the Nintendo Wii are now turning to free-to-play games on the ever-expanding base of mobile devices, said Pachter, who will be a moderator and a co-emcee at our GamesBeat 2014 event. King is monetizing Candy Crush Saga by selling more lives, akin to dropping in more quarters into arcade games.

That’s still a problem, Pachter said, because too many people are being trained to play games for free.

“Somebody has to address that,” he said. “There is no other entertainment medium that is free. We’ll make this mistake until we figure out how to make people pay.”

Blizzard hasn’t said how many players are paying for better cards in Hearthstone, but he guessed that the conversion rate is close to 80 percent.

“You play that damn game, and someone plays a card against you and beats you,” he said. “Then you have to get that card yourself.”

I was sorely tempted, as I figured out that it was easy for other players to crush me. Blizzard will keep the new cards coming every week, tempting me. But for the vast majority of game companies, free-to-play is going to be really tough.

Streaming games from the cloud through services like PlayStation Now — or its rivals Playcast and OnLive — will get a lot easier and will be better quality. And that will put another dent in the console hardware market. Companies like Nintendo will suffer in this transition, Pachter said.

What will happen to the other consoles? Pachter draws an analogy to the compact disc, which has taken a long time to die. In 1997, there were 1.01 billion CDs sold in the U.S., or four for every person in the country. In 2013, that number had fallen to 183 million. That’s still a huge number, and consoles games will likely continue to be sold for a long time as well. Microsoft and Sony will be successful in this generation, but it’s the last generation, according to Pachter.

“The physical media still exists,” Pachter said. “But there won’t be a next cycle.”