iGuardian is a device only slightly larger than a pack of gum that connects to your network before any other device and monitors the data going in and out from connected devices. Using the most recent security protocols, and with the ability to be updated as necessary, iGuardian serves as an Internet doorman of sorts, keeping an eye out for threats and denying them any kind of access whatsoever. iGuardian is easier to set up than any kind of software firewall, just needing to be plugged into the same network that others are plugged into. From there, iGuardian can protect not only computers, but smart home appliances, smartphones, and any other products connected to the network as well.

Thus far, iGuardian has raked in enough to beat its goal with time to spare. Because iGuardian is a physical device that monitors data being sent and received at the point of entry, it allows for strong security, peace of mind, and simple setup without sacrificing processor power or access to favorite social media sites. The presentation is very basic and no-frills, but the freedom that iGuardian opens up is enough to brag about once the home network is free from threats of malware and data theft. 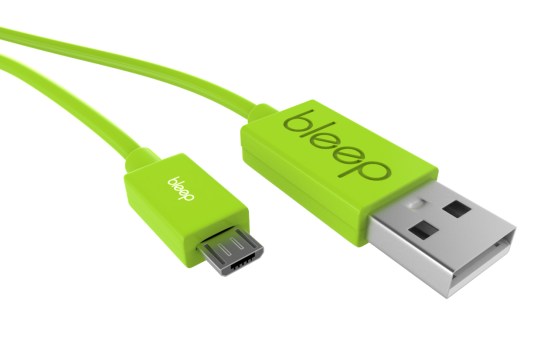 Bleep is a hybrid smartphone cable that can charge your iOS or Android phone and back it up at the same time. By condensing the charging cable with USB storage, bleep backs up your data every single time you plug it in without affecting charge time. With the data securely stored right on the cable, you’ll be able to recover relevant data to any smartphone even after losing your own. Its physicality also allows you to do all of this even without an internet connection or computer. In addition, bleep has created a mobile app on which you can manage your backups and set your own security parameters, giving users full control over how exactly their data is protected.

Bleep has already exceeded its goal with over a month left to go on the campaign. The bleep is an innovative take on the humble charging cable. Bleep intelligently adds utility to the charging cable while remaining unobtrusive. It would be nice to see more color choices and there’s some legitimate concern that a cable is often easier to lose than a phone itself. But the extra premium that bleep commands seems with it in terms of convenience and piece of mind. 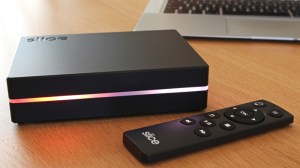 Slice is a hard drive-based media player designed to be snappy and easy to use. It’s a minimally designed black box outfitted with an array of usual ports along with a customizable LED ring that changes color depending on its current action. This adds a unique aesthetic twist to an otherwise unassuming design. Slice also ships with a custom-made RF remote, giving you the flexibility to be anywhere in your home and still command Slice.

Slice has already slammed its goal with weeks left to go on the campaign. One of Slice’s biggest draws besides its simplicity is its openness. Since it’s built atop a Raspberry Pi and uses the XMBC software, Slice is open and hackable, allowing more creative technical individuals to do pretty much whatever they’d like that’s within the device’s capabilities. Slice will have the most appeal to those who have large collections of movies that lack copy protection or who like a bit of a light show with their home video entertainment.