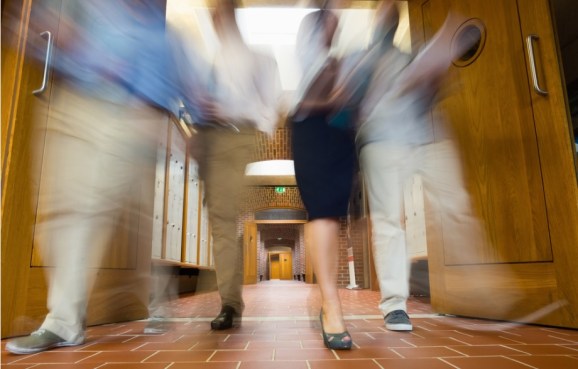 — “There is a fine line between genius and insanity. I have erased that line…”  Oscar Levant, 1959

“RUKM?” That was my initial response to Krish Ramakrishnan, founder and CEO of Blue Jeans Network, when he suggested that he broadcast his traditionally private, closed-door board meeting to his entire company over his video conferencing system.

I’ve served as a director of Blue Jeans and several other public and private company boards for many years, but broadcasting an entire board meeting live would be a first for me (and the five other directors on the board).

Like many VC directors, I had been trained to believe that board meetings were best performed as closed sessions, with only select investors and executives invited to attend, thus creating a forum for honest and open dialogue. Krish challenged that premise immediately, suggesting that our advice and discussion would make a bigger impact if the entire company could participate in the meeting. But board meetings in Silicon Valley are notoriously secretive, and at times combative and controversial, as directors and management try to tackle the hardest challenges confronting high growth companies.

Other tech companies such as Square had implemented small measures to open up the board room (such as distributing detailed board reports to employees), but to our knowledge nobody had ever tried something as raw and unfiltered as what Blue Jeans was about to do. The idea was genius, but also totally insane, and it was a fine line we would all need to walk.

After all agreeing to participate in the experiment (fingers crossed), we erased that line for three hours and held our most recent Blue Jeans board meeting live in front of the entire company, broadcasting to over 300 employees in five countries in an interactive format that encouraged employees to ask questions during the meeting. Our greatest fear in opening up our board meeting for all to watch was obvious: Conventional wisdom suggests that the larger the audience for a board meeting, the less information can be shared, and the less honest the discussion about a company’s performance and challenges will likely be. My biggest surprise? The opposite was in fact true.

Myth #1:  If every employee is watching, management will reveal less information with the board.

I was expecting a watered down board deck, with a lot less substantive information to protect the innocent. To my surprise, we got more information than usual, not less, particularly in our departmental reports. By putting the board materials in front of the entire company, there was a strong incentive for every department to be open, comprehensive, and accurate in reporting the status of their operations.

We were surprisingly breaking the unintentional “sanitizing” of information for board consumption, as the audience for board presentations was expanded to include all employees (many of whom had a deeply sophisticated understanding of our business). It even prompted a level of collaboration and interactivity between employees that I rarely see, which is extremely important in building an atmosphere of trust and honesty. As a result, board members were getting richer operational data generally intended for management, which gave us a more complete and transparent view of how we were performing.

Myth #2:  If every employee is watching, the board won’t talk about tough issues with management.

I was expecting many of the outside directors (myself included) to avoid talking about controversial or difficult topics in public. But high growth companies fly fast and are always facing turbulence, and it is our job as directors to help startups avoid or survive the moments of crisis that kill others. We have a job to do, and after about five minutes of warming up, it was impossible for everyone to sit on the sidelines. Directors serve many constituents, but none more important than the employees of a company, and bringing them into the boardroom reminds everyone of that obligation.

As a board we had to discuss numerous challenges: Over the past 12 months we have tripled our recurring revenue base and doubled our customers but are struggling to scale out our organization to support them. Like every high growth company, we aren’t meeting our lofty hiring goals and are fighting the talent wars in San Francisco. After the meeting, Krish reminded me that transparency is a form of two-way communication — “we don’t just want to tell you about our problems, we want you to help us solve them.”

Of course there are some topics that are irresponsible or legally impermissible to discuss in an open meeting format, and respecting professional and personal confidentiality is critical. But our experiment convinced me that the vast majority of the topics discussed in board meetings can be shared openly and responsibly with the entire company and that the impact of this clear communication is powerful and underestimated by most boards.

Great entrepreneurs and CEOs know it’s important to build a culture of trust through transparency. Leaders who have tried to build organizations around this principle know it is easier said than done, and it’s time for board members to take on the same challenge. Can we overcome conventional wisdom and break down the boardroom walls of Silicon Valley? It’s right on the fine line between genius and insanity.

Jon Sakoda is a partner at New Enterprise Associates and a director of Blue Jeans Network. Jon’s perspectives on VC and entrepreneurship can be found at www.jonsakoda.com or on Twitter @jonsakoda.