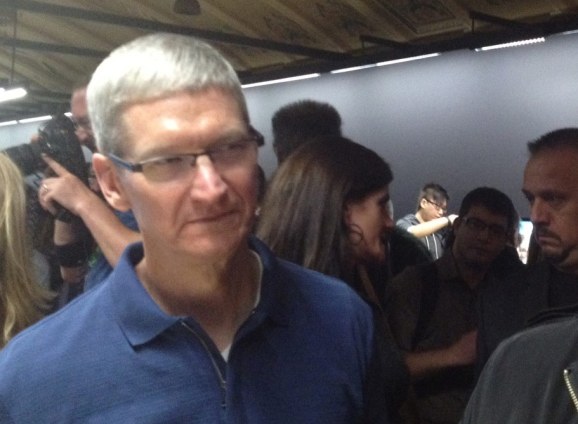 Everything is happening on Tuesday Sept. 9 in the world of technology and gaming. It feels like a nexus of events that are somehow all tied together.

And while days like this used to seem busy for just tech journalists or Silicon Valley, now the whole world is watching. I think of it as the Rapture of technology, or the final comeuppance of four decades of Moore’s Law and the convergence of computing, communications, and mobile technology. Let’s hope it’s not going to be a big disappointment. With billions of people on the internet, the audience for this day’s events will be so much bigger.

Above: Fitness wearable from Intel and SMS Audio

It is, of course, going to be a big day for Apple news. At an event in Cupertino, Calif. near its headquarters, Apple is expected to announce the iPhone 6 with larger screens and, if we’re lucky, it will also unveil its new iWatch, a wearable smart device that measures your fitness activity and helps improve your health. This alone is reason enough for every other company in the world to cancel their press announcements until another day.

Intel, meanwhile, is staging its big Intel Developers Forum event at the Moscone West convention center in San Francisco. Brian Krzanich, chief executive of Intel, will give his keynote at 9 am, just before Apple CEO Tim Cook is due to take the stage in Cupertino.

Krzanich is expected to talk about Grantley, the code-name for the newest family of server chips, and chips for other devices as well. Krzanich is also expected to say more about wearable devices, as he announced in January at the Consumer Electronics Show that Intel would launch its own fashion-forward wearables.

Smaller startups like Basis Science pioneered this market, and Google pushed it forward with Glass. But now the big titans are coming in, as the fundamentals behind the gee-whiz technology are now ready for mainstream applications. Moore’s Law, or the 1964 prediction by Intel chairman emeritus Gordon Moore that the number of transistors on a chip will double every couple of years, makes it easier and easier to build faster, smarter, and more efficient tech gadgets.

I mean, if wearables like Glass seem a little clunky now, just wait a little bit and they’ll get better. Intel bought Basis Science and it is churning out its own line of wearables, and it is making the components that go into them as well. Rival Samsung, Google, and Amazon are all expected to compete as well in wearables.

Intel is in the interesting position of supplying components and then making the end devices too. It really should be supplying Apple with chips, but Apple doesn’t want to be enslaved to Intel. So these tech titans seem to go out of their way to mess up each other’s press events (with Apple emerging victorious because of its cool cachet beating Intel’s nerdiness). They should be working together in a kind of giant ecosystem built for the benefit of consumers. But nobody wants to concede the day and let the other guy have all of the media attention.

In gaming, there will also be a comeuppance. Activision Blizzard will publish Destiny, the massively multiplayer online first-person shooter game created by Halo developer Bungie. On Sept. 9, Activision will start delivering preordered games and selling the packaged titles in stores. Some analysts are expecting that Destiny will outsell Call of Duty this year and become one of the best-selling games of all time. At $60 a copy, you can bet it will be a better bargain than an iWatch or an iPhone 6. Wouldn’t it be cool if all of the players gathered in the virtual world of Destiny and did a salute to Apple in some way? But Cook would never notice. He’s not a gamer.

Above: Destiny is on track to outsell everything else in 2014, according to analysts.

TechCrunch Disrupt SF 2014, the startup conference from tech media site TechCrunch, is also going to be in full swing on Tuesday. It formally kicks off on Monday, but Tuesday will feature talks with Salesforce.com’s Marc Benioff and other tech luminaries who either didn’t get an invitation to Apple’s event or just didn’t care about it or had admins who forgot to check the big Rapture day on the calendar. We live and breathe startups, so we’d be delighted if some small tech company managed to make some news that steals some of the limelight from the tech titans. But don’t bet on it.

Another entity that didn’t get the memo about Apple’s big event was the Cellular Telecommunications Industry Association, which will hold its Super Mobility Week in Las Vegas starting Sept. 9. Normally, when an entire industry stages an event, you figure that will get all the attention. But compared to Apple, these guys are the underdogs.

There are even expectations that Alibaba plans to file for its initial public offering during this week. The Chinese e-commerce giant is expected to raise $26 billion and begin trading this month in the largest IPO in stock market history. That is quite possibly the only thing that could be more significant in a financial sense than Apple showing off a little hunk of plastic and metal.

It’s going to be a challenge, but VentureBeat is going to try to have someone at all of these events, or at least covering them and what they mean from afar. Wish us luck, and come back and read updates about everything that is happening on Tuesday and beyond at VentureBeat. I wish that someone would tell me it means that all of these things are happening at once. It seems like the end of the world, or maybe the beginning of one.

I hope I have established, by pointing out these coincidences, that Sept. 9 is indeed going to be the Tech Rapture. We’re all going to be in gadget heaven.