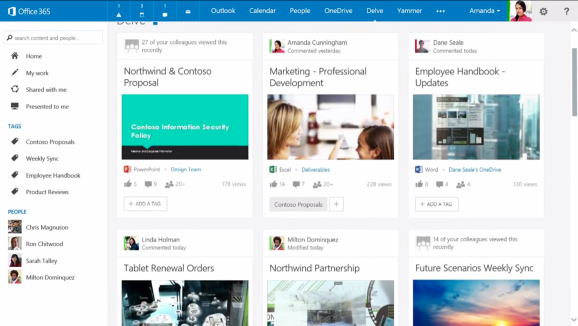 Microsoft today announced that its Delve product, which pulls up relevant documents to help business people, has shipped to Office 365.

The tech giant first announced the service in March. A Microsoft executive showed off the product during a OneDrive demo for VentureBeat but avoided citing a release date. Now Delve can start helping Office 365 business users become a bit more prepared for their meetings and other activities, by aggregating information from emails, SharePoint, Yammer, and OneDrive.

Office Delve is a new way to discover relevant information and connections from across your work life. Delve displays information that is most relevant for each person based on the work they are doing and the people with whom they are engaging. With Delve, information finds you versus you having to find information.

With Delve, Microsoft is becoming smarter about the files it has in an online — think “cloud” — environment. Google has pushed in that direction, with Google Now, for instance, and Microsoft is designing products with a somewhat similar mindset. And it lines up with new Microsoft chief executive Satya Nadella’s stated vision for Microsoft as “the productivity and platform company for the mobile-first and cloud-first world.”